Gogoat is a quadrupedal mammalian Pokémon that resembles a goat. It has large horns, bush-like shrubbery growing on its back, and a sturdy, somewhat chubby body.

It carefully observes its trainer. Like Skiddo, it can read the trainer's mood when he or she touches its horns while riding on its back.

They live in herds led by a single individual. These leaders are decided through a series of battles in which they clash horns with one another to establish dominance. These Pokémon tend to be docile and placid, particularly when around humans. Gogoat are far more commonly seen, however, on farms and pastures; some cities.

Gogoat is based on a goat and possibly Faunus, gods of nature in Roman mythology that were half goat. Its horn shape is also reminiscent of gazelles or ibex. It also shares traits with a motorcycle as its horns resemble handlebars and it can be ridden like one.

Gogoat and its Japanese name, Gōgōto, come from 轟轟 (gōgō, rumbling), go (to move from one place to another) and goat. 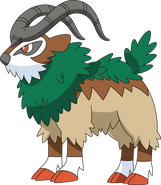 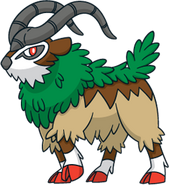 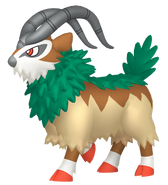 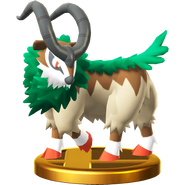