Glastrier resembles a white horse, with several ice spikes on its hooves, tail, and face.

When it wants something, it will take it by force. It also likes eating crops, as stated by Calyrex. It especially likes Iceroot Carrots.

Glastrier does not evolve.

Glastrier possibly draws inspiration from the Four Horsemen of the Apocalypse with Glastrier representing the White Horse of Conquest given its forceful nature and it's acts of taking what it wants by force. It may also take inspiration from a unicorn. The unicorn is the national animal of Scotland, which the Crown Tundra is based on. Unicorns in mythology are also stated to be wild beings and only those with pure hearts can tame them. This is shown with how Calyrex is able to tame and ride Glastrier. Alternatively, could be based on the Púca, a mythological shapeshifting creature ridden by the High King Of Ireland that often took the form of a horse. The Púca was tamed by a bridle made of its tail hair, like the Reigns of Unity, and it tended to come in either black or white, just like Spectrier and Glastrier. It may also take inspiration from the white chess pieces in the game chess, specifically the Knight pieces, which depict a horse's head.

Glastrier may also be based on the concept of a physical form as opposed to Spectrier being based on a spiritual form. This is furthered with its high Attack stat (which is intended for physical attacks), its Ice type (with ice being a solid physical object), and its ability to bring intense colds where it roams (cold is a feeling felt physically rather than spiritually).

Glastrier comes from glacier and destrier (a medieval battle horse). 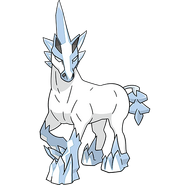 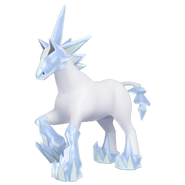