Glalie appears to be a levitating face with ice surrounding most of its black face. It also has black horns coming out from the top and holes in the ice, revealing some black Glalie has. Glalie also has light Blue eyes and with its spherical shape and ice covering its black with holes in it, Glalie can resemble a soccer ball somehow.

Glalie has the abilities Inner Focus or Ice Body as well as the hidden ability, Moody. Inner Focus prevents Glalie from flinching while Ice Body heals a bit of Glalie's HP in hail. This also allows non Ice-type Pokémon to regain a bit of HP, too, if they have the ability instead of taking damage from Hail. Glalie's hidden ability Moody allows two of Glalie's stats to increase a bit and one decrease a bit.

Glalie evolves from Snorunt at level 42. It can also Mega Evolve by using a Mega Stone. Glalie gains this mega evolution in Omega Ruby and Alpha Sapphire.

Ash's Snorunt evolved into a Glalie in AG123: Rhapsody in Drew and then got sent to Professor Oak's lab. In DP116: The Drifting Snorunt, a Glalie was owned by a poacher. 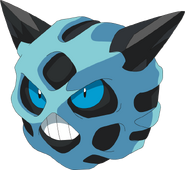 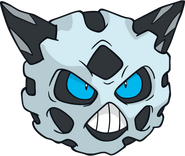 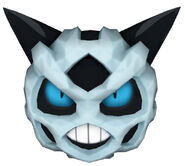 Glalie appears to be based on a scary human face, an oni, or an ice hockey mask.