For other versions of Silvally belonging to Gladion, see Gladion's Silvally.

Name
グラジオのシルヴァディ
Gurajio no Shiruvadi
(Gurajio's Silvady)
Voice actor(s)
Toru Sakurai
Notes
Depending on the context, "の" may be the possessive, unless it is used in the name of a character, Pokémon, or fossil.

Name
?
?
(?)
Voice actor(s)
?
Notes
Depending on the context, "의" may be the possessive, unless it is used in the name of a character, Pokémon, or fossil.

Rising from the Ruins!

Name
グラジオのタイプ：ヌル
Gurajio no Taipu: Nuru
(Gurajio's Type: Null)
Voice actor(s)
Toru Sakurai
Notes
Depending on the context, "の" may be the possessive, unless it is used in the name of a character, Pokémon, or fossil.

Name
?
?
(?)
Voice actor(s)
?
Notes
Depending on the context, "의" may be the possessive, unless it is used in the name of a character, Pokémon, or fossil.

Prior to Rising from the Ruins! (location: Aether Foundation)
This Silvally is a Normal-type Pokémon owned by Gladion. As Type: Null, Gladion nicknamed it Silvally.

When Gladion was young, he took Faba's Type: Null, knowing that the scientist mistreated the artificial Pokémon.[1]

Type: Null, nicknamed as Silvally, was used by Gladion to save Ash and his Pokémon from several Pinsir by hitting them with Air Slash. Gladion explained his Silvally was used in order to combat the Ultra Beasts, and later battled against Ash's Lycanroc as part of the training. Lycanroc used Rock Throw, but Silvally repelled the attack with Double Hit. Lycanroc evaded the attack, while Silvally used a combination of Swords Dance and Crush Claw. Lycanroc attempted to bite Silvally, but got hit by Crush Claw. Silvally attempted to use Air Slash, but was hit by Lycanroc's Accelerock. Lycanroc attempted to use Bite once more, but was pushed into a lake by Silvally's Double Hit. Lycanroc became muddy, and went into a rage, ignoring Ash's orders and attacking Silvally with Bite, but was blown away. After Lycanroc was calmed down by Nebby, it resumed the battle. Lycanroc attempted to use Accelerock, but Silvally quickly defeated it with a combination of Swords Dance and Crush Claw. Before leaving, Gladion asked of Ash not to tell Lillie anything about him, especially about Silvally.[4]

Gladion was with Silvally in a cave, when Nebby unintentionally brought Lillie to him. Silvally jumped to Lillie, who remembered an accident involving Silvally a long time ago, which made her become fearful of touching Pokémon once again.[5] Faba sought out Gladion at his motel room, and attacked him. Gladion fell asleep by Faba's Hypno's Hypnosis, while Faba snatched his Silvally. Later, after Gladion took Silvally back, he went with Lusamine to Faba and sent Silvally out. Lillie screamed at seeing Silvally, whose mask broke into pieces.[1]

Silvally then rescued Lillie from being held by Faba's Alakazam, which caused her to regain her memories of it saving her from an Ultra Beast. Gladion activated the Dark Memory and Silvally changed into a Dark-type. Silvally then defeated Alakazam and Hypno with a Multi-Attack, freeing Ash, Pikachu, Nebby, and Snowy from Hypno's Psychic. Lillie apologized for misunderstanding Silvally and hugged it to thank it. To her surprise, she regained her ability to touch Pokémon again.[1] Silvally was used again to battle an Ultra Beast, named "UB01: Symbiont", in order to protect Lillie from getting attacked again. Silvally used Air Slash, but was knocked out by Symbiont's Venoshock attack. It, along with Snowy and Umbreon, prepared for another battle, but watched in horror as Symbiont grabbed Lusamine and carried her into the Ultra Wormhole.[6]

Gladion and Lillie rode on Silvally, and went to Poni Island in hopes of finding the legendary Pokémon, Solgaleo, and open the Ultra Wormhole at the Altar of the Sunne. Along the way, they encountered various traps and a pack of Jangmo-o and Hakamo-o, led by a Totem Kommo-o at Vast Poni Canyon. Silvally used Crush Claw to attack Totem Kommo-o, who retaliated with Clanging Scales. To have the advantage, Gladion threw the Fairy Memory to have Silvally change into a Fairy-type. However, a Jangmo-o disarmed Gladion from the item, which went to Totem Hakamo-o. Lillie's Snowy used Powder Snow on the floor, allowing Gladion and Silvally to slide down and obtain the Fairy Memory. Totem Kommo-o fired Clanging Scales, but Gladion managed to equip Silvally with the Fairy Memory, thus negating any damage. Silvally managed to defeat the Totem Kommo-o with Multi-Attack, causing the Totem to fall down. As the cavern started collapsing, Gladion and Lillie hurried to the exit, with Ash, his classmates, Rotom, and Professor Kukui destroying the falling rubble.[7]

Silvally, Umbreon and Lycanroc were later used in the Ultra Space to battle Lusamine's Absol, who glowed with an aura, to rescue its trainer. Silvally ended up getting its feet trapped in ice, created by Absol's Ice Beam, while the rest of Gladion's Pokémon were paralyzed by Mean Look.[8] Gladion equipped Silvally with Fire Memory, melting down the ice and using Multi-Attack to burn Absol. Lycanroc and Umbreon were freed from the Mean Look. Silvally used Crush Claw on Absol, who retaliated with Ice Beam, only to get countered by Umbreon's Dark Pulse. Silvally used Air Slash on Absol, who was defeated by Lycanroc's Z-Move, Continental Crush. Due to the Ultra Beast's control over Absol, it stood up and continued the battle, with Lycanroc using Stone Edge. Gladion mounted on Silvally, letting the rest of his Pokémon deal with Absol. He joined up with Lillie and rode towards Ash. Due to the poisonous liquid separating the group, Silvally was equipped with a Steel Memory and crossed the liquid with no harm. Once there, Silvally roared, as Gladion exclaimed it was trained to combat the Ultra Beasts. Lillie, who tried to persuade her mother to stand down, failed. Lusamine attacked her, but Gladion and Silvally rescued Lillie before the attack could happen. As Ash went to mount an attack, Silvally distracted Lusamine by attacking the rubble she created with Air Slash. Silvally watched as Ash and Pikachu unleashed the Z-Move and caused the Ultra Beast to diffuse with Lusamine.[9]

Silvally appeared in Gladion's flashback of Ash and Pikachu performing their Z-Move while he was telling Ash that he'll be taking on the island challenge.[10] Ash remembered Gladion and his Pokémon during his battle against Nanu and his Krookodile when Lycanroc became enraged, due to its fur getting dirty.[11] Sometime later, Silvally started acting restless as it sensed the Ultra Beast's presence. Gladion called it down and assumed that something is definitely wrong. It went with Gladion to help the Ultra Guardians investigate the Altar of the Sunne at Poni Island.[12] During the battle against the Ultra Beast, Silvally and Pikachu teamed up to save Nebby and Lunala from Team Rocket's electric net. After the Ultra Beast fused with Nebby and escaped through the Ultra Wormhole, Silvally and the Ultra Guardians took Lunala to the underground base, where it was being treated for its wounds. However, Lunala was healed when Ash, Kiawe, Lana, and Gladion inadvertently combined their Z-Power through their Z-Rings.[13]

To stop the being, which was named as Necrozma, the Radiant One, Gladion had Silvally use Air Slash. Just as Silvally went to repeat its attack, Ash stopped Gladion, for they had to find a way to rescue Nebby without hurting Necrozma.[14] Having heard how to save Necrozma, Gladion and Silvally shared some of their Ultra Aura to have Necrozma recovered. Since that was not enough, Gladion went on Silvally, who used Air Slash to distract Necrozma from attacking Lunala.[15] Rotom recorded the fight between the Ultra Guardians and Necrozma, and transmitted it to the Aether Foundation, per Lusamine's request.[16]

Upon arriving at Poni Island, Silvally trained with its teammates, then watched Gladion and his Midnight Lycanroc battle Ash and his Dusk Lycanroc, and congratulated the former two for being victorious.[17] Gladion continued training on Poni Island: his Silvally used Air Slash against Lycanroc, who evaded the attack with Stone Edge. Suddenly, mist started to form around them, so Gladion went with his Pokémon through the mist and found Lillie. The group tried to find Lillie and Gladion's passed-away father in the mist, but failed. When the mist subsided, Hapu informed them their father didn't appear in the mist because he was alive. Thus, Gladion went on Silvally to tell his mother of these news.[18]

Gladion sent Silvally to battle during the preliminary round of the Alola Pokémon League, which they passed. Silvally fought a Talonflame, so Gladion equipped it with a Rock Memory, turning its Multi-Attack into a Rock-type move to defeat Talonflame. Soon, the two found Ash and Pikachu lying on the floor. The two sides glared at each other, until Gladion sensed danger. Pikachu used Thunderbolt to defeat a Clawitzer, while Silvally used Crush Claw on a Primeape, which were going to attack their Pokémon. After the preliminary round was over, Gladion and Silvally were watching the sunset, after learning they'd have to face Lillie in the next round.[19] Gladion sent Silvally to attack the Team Skull grunts, who were harassing Mimo, with Air Slash. During his semi-finals battle, he sent Silvally to battle Kiawe's Turtonator, after his Lycanroc got defeated.[20]

Silvally used Air Slash on Turtonator, who countered the attack with Flamethrower. Silvally went to attack with Crush Claw, though Turtonator's Dragon Tail repelled the attack. As Silvally repeated its attack, Turtonator used Shell Smash to avoid the attack. Silvally's claw got stuck in the ground, to which Kiawe used the opportunity to have Turtonator unleash Inferno Overdrive Z-Move. However, Gladion equipped Silvally with the Fire Memory, which let it endure the attack. As Turtonator was exhausted, Silvally used Crush Claw, which defeated Turtonator.[21] At evening, Gladion and his Pokémon observed the sunset, the night before the Pokémon League finals began.[22]

During his finals battle, he sent Silvally to battle Ash's Melmetal. During their battle, Gladion equipped Silvally with the Fighting Memory and was able to defeat Melmetal, but not before taking heavy damage. Silvally then battle Pikachu which it loss to, leaving Zoroark to battle against Pikachu.[23] While Gladion continued to battle Ash at the Pokémon League, the two guys remembered their past confrontations involving Silvally.[24] Kukui also noted Ash had grown stronger, remembering his League battle against Gladion's Silvally.[25] Before Lillie, Lusamine and Gladion went on their journey to find Mohn, Rotom took picture of the group, including Gladion's Silvally.[26]

As a Dark type

As a Fairy type

As a Fire type

As a Steel type

As a Rock type

As a Fighting type 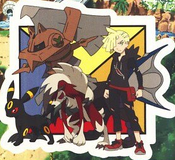 As Type: Null with Gladion