Giratina (Japanese: ギラティナ Giratina) is a Legendary Ghost/Dragon-type Pokémon. Giratina is the Version Mascot for Pokémon Platinum. It is a member of the Creation Trio, alongside Dialga and Palkia.

Giratina's Altered Forme is a giant, dragon-like Pokémon, with an appearance similar to that of a large sauropod. It has 6 legs, gold protrusions that look like external ribs, and golden horns on its head. Its neck has five red stripes and 4 black stripes. On its back, it has a black stripe pattern that extends to its legs. It has black wings with three red thorn-like appendages called Girasols (a rare type of opal) coming out of them. Giratina's Origin Forme is more serpentine (like an amphitheater) than its Altered Forme. Its wings are now shaped like tentacles with the red thorn-like appendages sticking out at the end. Its mouth is now behind the two appendages in front of its face. They open when Giratina roars or etc. The horns on its head are still the same. Giratina in Origin Forme has five rows of golden spikes protruding out of the torso and near the tail. Five gray and red stripes are partially overlapped by these spikes.

Like some Pokémon, it has a signature move, called Shadow Force, which hits the opponent without fail even if the foe uses Protect or Detect beforehand. When in its Origin Forme, it retains its phenomenal amounts of HP, like any other Pokémon that is in their alternate formes, and it focuses on more offensive moves, and less on the defensive moves. It switches its Attack stats with its Defense stats in its Origin Forme, making it a great powerhouse. It is also a vastly powerful Pokémon that can use these benefits to fit the trainer's focus on attacking.

In X and Y, the Griseous Orb is located in Terminus Cave on the same level where you battle Zygarde. The same goes for the Lustrous Orb and Adamant Orb.

Among the most complex Pokémon to understand, Giratina is both malevolent and dreaded in both it's nature and appearance. For all the fear it receives, Giratina can be merciful to less evil creatures. A decent example of it's merciful side, is that it will freely allow the player to enter and leave the distortion world, even in defeat and despite Team Galactic's previous meddling.

Giratina does not evolve.

Giratina, along with Dialga and Palkia, was created when Arceus hatched from its egg. Arceus tasked Giratina to create anti-matter. Giratina was known (other than Mewtwo) to be one of the most aggressive pokemon. Because of this, Arceus banished Giratina to the Distortion World, where it supposedly would be trapped forever.

Giratina has a large role in the 11th Pokémon movie, Giratina and the Sky Warrior, where it tries to attack Dialga for polluting its dimension with its earlier battles with Palkia. However, later on it is captured by Zero and nearly killed after he tries to absorb its powers. Giratina is rescued by Ash and his friends, with help from Shaymin. Giratina also has a role in the 12th Pokémon movie, Arceus and the Jewel of Life, where Giratina fends off Arceus as Ash and friends prevent the betrayal long ago from happening.

A Giratina appeared in the 18th movie as one of several Legendary Pokemon summoned by Hoopa Unbound in order to attack its light side.

Giratina is possibly based on Fallen Angels, beings who despised God and were sent to Hell (similarly reflecting how Giratina despised Arceus and was sent to another dimension). It is also possibly based on Seta, a giant centipede from Japanese folklore that ate baby dragons and was as tall as a mountain. The fact it has 6 legs, 6 wing spines and 6 gold ribs on its chest could be a reference to 666, which is the Devil's Number. It might also be referencing to multiple visions of Satan, which are often seen as a serpent. Along with these resemblances, Giratina's species is the Renegade Pokémon; this may also be referencing the fact that in the Bible, Lucifer became "renegade", separating himself from God, before the creation of the world. It may also be based on Samael, the god of destruction that, despite being chaotic, has a god-like and heavenly ruler, similarly how Giratina is often associated with death and destruction while it is still under the rule of Arceus, a heavenly god-like being. Samael is also the 5th God of Heaven, and Giratina is the 5th Legendary Unova Pokémon after the Lake Guardians. Both of its forms are similar to the Beasts Of Revelation, with its Altered Form looking like the Earth Beast and its Origin Form looking like the Sea Beast. Its Altered Forme shares some physical traits with sauropod dinosaurs, bats, and insects. Most of the golden parts of its body are also similar to bones, most notably, a rib bone. Its Origin Forme shares some physical traits with spiders, scorpions, bats, snakes, spiders and the ancient legend of Amphiptere, a dragon that had wings, but no legs. Its relation with Dialga being based on solids and Palkia on liquids, Giratina is possibly based on antimatter or gas.

Giratina comes from guillotine, girasol (a type of red opal), and purachina (Japanese for Platinum). 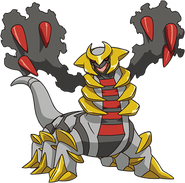 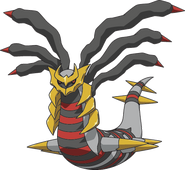 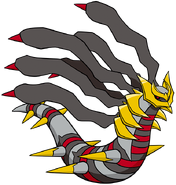 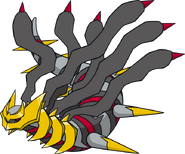 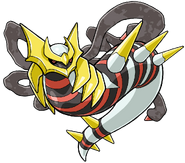 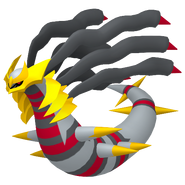 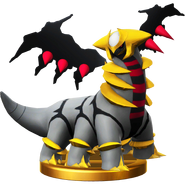 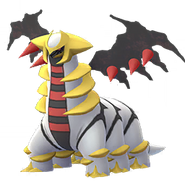 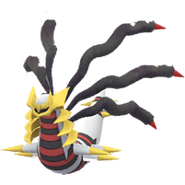 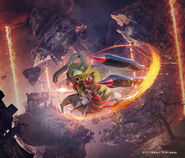