Ghetsis Harmonia Gropius is one of the executives of Team Plasma, and the main antagonist of Black and White. He is notable for being the only crime syndicate executive from the main series of Pokémon games who serves as the final trainer of the game, as opposed to the usual Champion. Unlike previous crime syndicate executives, Ghetsis is not fully loyal to Team Plasma's goal, instead manipulating N, his adoptive son, to use Team Plasma for his own selfish purpose to be the only trainer left in the world with Pokémon, thus granting himself the power to become a dictator.

Ghetsis has red eyes and long, pale green hair, with two locks of it sticking out by his eyes. He wears a red eyepiece over his right eye for unknown means. He mostly hides his right hand among his robes.

Ghetsis has two additional locks of hair, which slide down to his shoulders. Ghetsis wears a white robe, like his fellow Seven Sages, with an elaborately designed brown piece with blue rectangles above it, holding a two-toned cloak with eye patterns above his robe; the left side of his cloak is purple while the right is yellow. He wears brown loafers. The Team Plasma crest lays right below the collar of his cloak.

Ghetsis's personality seems to be like an inspirational speaker regarding the release of Pokémon when first encountered. However, as the game progresses, he gradually reveals his true personality: that of a cruel megalomaniac who will stop at nothing to get what he wants. He has no qualms in using the innocence of N for his plot to rule the world. Contrary to many of his speeches, he views Pokémon merely as tools, thinking them too valuable to be lost. He wishes nothing more than to totally dominate the Unova region and rule over it with an iron fist, enforced by his own Pokémon and Team Plasma.

He has great charisma, as he was capable of convincing the members of Team Plasma, including the Seven Sages to follow his ways. His charisma is demonstrated as many people are somehow influenced by his speeches, making them to at least rethink the relationship between Pokémon and humans. Despite his villainous goals, this marks the first time the discussion of Pokémon rights and freedoms have been thoroughly discussed in-game.

He seems easily infuriated when things don't go his way, so he was noticeably angry when N decided that the player character should have the other Legendary Pokémon to fight him. When N was defeated, he was even angrier; his plans had taken a major blow, resulting in him challenging the player character in a fit of rage and revealing his true nature to N.

He is known to be a brilliant scientist, as one of the Plasma Scientists claimed that he created a system capable of robbing Pokémon from the Storage System from all over the world.

In Black 2 and White 2, Ghetsis appears to have become somewhat insane, going so far as to command Kyurem to impale the player character with icicles at one point (although failing due to N's intervention). Also, he is visibly mentally unstable, bursting into fits of rage that prompt him to shout and to aggressively slam his cane to the ground. A Shadow Triad member points out Ghetsis loses control, which further evidences this behavior to be recurrent. After being defeated in Black and White 2, Ghestis suffers a mental breakdown and is rendered incapable of continuing his evil goals.

The player character will first meet him in Accumula Town where he gives a speech to the locals about how you shouldn't enslave Pokémon. Ghetsis is described as having a bitter and look-at-me type of character. His son is N, as he specifies while lecturing him about losing to the player character. During the quest, the player character finds Ghetsis numerous times telling everybody to send their Pokémon to Team Plasma to be released back into the wild. Ghetsis's motives are different from that of N's because N understands Pokémon and supports them with a full heart.

Around the end of the game, when N was defeated Ghetsis appears and says that the once impressive leader was a disappointment for losing to the player character, and then reveals that he was using him all along just for his own needs, to use Pokémon to rule the world. After saying this he thinks that N is a pathetic Leader and should be banished from Unova forever, he then challenges the player character as the final trainer of the game (excluding there being a Champion in the main game and counting his absence post-game). Despite his strong team of Pokémon, Ghetsis loses to the player character. After that, he is taken away by Champion Alder and Cheren. However, during the battle within the Castle, Ghetsis escaped from Cheren's custody, from where his current location is unknown. As revealed by the Shadow Triad, not even they know where he will go or what he will do. However, he leaves the three orbs of the creation dragon trio from Sinnoh behind for the player character.

Unlike in the previous games, Ghetsis is only seen after the player character defeats Colress in the Plasma Frigate, which he unlocks a portal that was previously blocked by a rather cowardly Team Plasma Grunt. After the player character enters Ghetsis's office, he is visibly angered upon Colress's failure and declares upon how the scientist is more interested in his own goals rather than Team Plasma's. Then, he reveals that he plans to use Kyurem's power to completely freeze the entire Unova region and conquer it. The Shadow Triad quickly appears and Ghetsis escapes, leaving the player character and Hugh to deal with the ninja-like grunts.

Ghetsis is later encountered in the Giant Chasm, where he reveals the Legendary Pokémon, Kyurem. Ghetsis indirectly comments upon how the memory of being defeated by the player character of the previous games continued to haunt him. Shaking it aside, Ghetsis then orders Kyurem to use Glaciate to freeze the player character solid, but before it could hit, N appears with Reshiram/Zekrom and uses Fusion Flare/Fusion Bolt to block the attack. Ghetsis is angered that N has returned to foil his plans yet again, but Ghetsis reveals that N's appearance is what he planned all along. He fuses the DNA Splicers (which were previously robbed from Drayden by the Shadow Triad) with Kyurem, shattering the two horn-like protrusions on its back. Kyurem attacks Zekrom/Reshiram with homing beams of light and successfully captures it, reverting the Legendary Pokémon into their stone forms. Ghetsis marvels at how easy it was and quickly orders Kyurem to utilize "Absofusion". Kyurem absorbs the Dark Stone/Light Stone and transforms into Black Kyurem/White Kyurem. Ghetsis then berates N for betraying him, commenting that if he continued to be loyal, Unova would be remained beautiful. Ghetsis then challenges the player character, but not before voicing his furious denounce at how the player character's Poké Balls are trembling with emotions. Ghetsis also reveals that his cane emits signals that completely disrupts the functionality of Poké Balls, forcing the player character to defeat Kyurem instead. Despite its magnificent power, Kyurem is defeated and separated from Zekrom/Reshiram and escapes deeper into the Giant Chasm. Ghetsis becomes highly furious and attacks the player character in a fit of rage. While he put up a good fight, Ghetsis is defeated. Unable to comprehend his failure, he suffers a mental breakdown and aggressively rejects N's idea of Humans and Pokémon co-existing in harmony. A member of the Shadow Triad appears and states that Ghetsis lost control and takes him away, leaving behind his cane, which was plunged into the ground after he slammed it.

While Ghetsis is not seen in the game until the player character reaches his office, he is mentioned much, mostly by Zinzolin, the Team Plasma Grunts and the Shadow Triad.

Ghetsis in Pokémon the Series (anime) 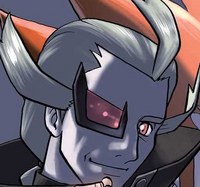 Ghetsis' VS Sprite from Black & White

Ghetsis' VS Sprite from Black 2 & White 2

Ghetsis and Team Plasma looming over Hilbert, Cheren and civilians.