This Pokémon has a rock for a head, no nose, and two long arms that start with a bulging muscle and end with rock hands resembling a human's.

Alolan variant Geodude are slate grey with black eyebrows and three-fingered hands (the middle, ring and pinky fingers are now one).

Geodude most frequently are found in fields and on mountains. People step or trip on them from time to time, mistaking them for rocks. Its arms are so strong that it can use them to climb mountains. Rhyperior sometimes accidentally shoot Geodude from their cannon-like arms.

The entire body of an Alolan Geodude is electrical and magnetic. Anyone who steps on a Geodude will feel a slight snap followed by a nasty jolt of electricity. Alolan Geodudes often compete in headbutting battles; the one with the strongest magnetic force will attract more iron sand.

Geodude can have the ability Rock Head or the ability Sturdy. Rock Head prevents Geodude from suffering recoil damage from using moves like Double-Edge. Sturdy causes all OHKO moves to be negated.

Geodude is a recurring character in the Pokémon anime. It first appeared in the fifth episode, "Showdown in Pewter City ," used by Gym Leader Brock to battle Ash. Brock became a travel companion of Ash and owned Geodude for the first five seasons. Navel Island Gym Leader Danny, Rustboro City Gym Leader Roxanne and Oreburgh city Gym Leader Roark have also used Geodude. In the anime, Geodude is able to levitate above the ground. 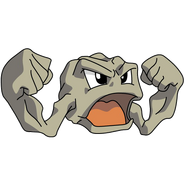 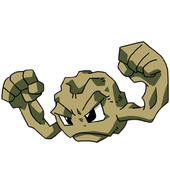 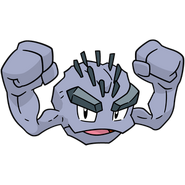 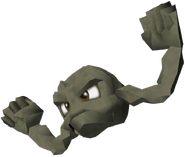 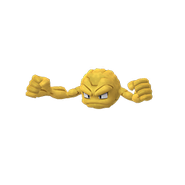 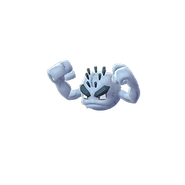 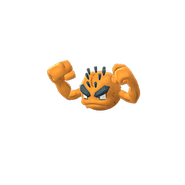 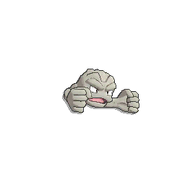 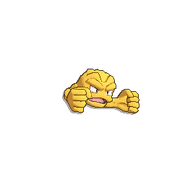