Generation VI (Japanese: 第6世代 Dai Roku-sedai) is the first generation of the Pokémon series to be exclusively 3D, meaning it is the first in the series to ever require a Nintendo 3DS system. Not very much else is known about it except that the first set of games are known as Pokémon X and Y version. They are set to release worldwide in October 12th, 2013. This Generation also introduces the 18th Pokemon type, Fairy, the first new type to be added after Dark and Steel where added in Generation II.

The generation features many changes such as 3D cel-shaded graphics, more in depth battle scenes and a brand new camera view. The new region's name is Kalos, which draws inspiration from the continent of Europe. This is suggested from similarities of the tower that the male player is skating away from in the trailer, and the Eiffel Tower which is the main monument of the city of Paris, France. Also, a bridge that may be based on the popular London Bridge has also been seen in the game, as seen in the trailer with the female player running over it. Near the bridge stands a large statue of Golurk, that's something important to the town. 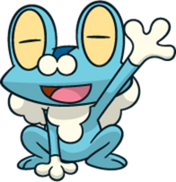 Pokemon-x-&-y-pikachu.jpeg
A wild Pikachu.
Add a photo to this gallery

Retrieved from "https://pokemon.fandom.com/wiki/Generation_VI?oldid=414764"
Community content is available under CC-BY-SA unless otherwise noted.