Showdown at the Po-ké Corral

Prior before Putting the Air Back in Aerodactyl

An unknown # of episodes as a Doduo

This Dodrio is a Normal/Flying-type Pokémon owned by Gary Oak.

Gary's Dodrio was briefly seen for the first time as a Doduo in Showdown at the Po-ké Corral at Professor Oak's Laboratory. It later appeared as a fully evolved Pokémon in Putting the Air Back in Aerodactyl, where Gary used it to stop Butch and Cassidy from stealing an Aerodactyl. 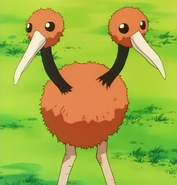 As Doduo
Add a photo to this gallery
Retrieved from "https://pokemon.fandom.com/wiki/Gary%27s_Dodrio?oldid=1244186"
Community content is available under CC-BY-SA unless otherwise noted.