Garbodor is a massive, monstrous Pokémon that appears have mutated from the toxins within a garbage bag. It has what seems to be a broken trash bag on its head, and covering the top part of its body. It has two ear-like clusters of garbage protruding from the top of its head. It has large round eyes and a gaping fang-filled mouth. The bottom part of its body is made entirely of filthy grayish brown garbage-like slime. It has patches of green and pink within the slime, and two arm-like appendages with metallic tubes sticking out. It has short stubby feet. Garbodor also appears to have a small tail.

A Gigantamax Garbodor's eyes turn red and its body expands so much to the extent its feet are no longer visible. Various toys can be found on it. Its shoulder spikes extend and its right arm looks much thicker. Its body is covered with dark blue, pink, and light green spots.

Garbodor ensnare their foes with their left arms and immobilize them with a strong odor secreted from their mouths. They are able to absorb toxic waste and use it to build their own bodies.

In addition, Garbodor consume vast amounts of refuse daily. Their bodies contain potent toxins undiscovered by science, developed from the rancid waste they eat; a Garbodor's poisonous cocktail will change daily based on its last meal. They have adapted to consume garbage so efficiently that they do not even have to chew; they simply inhale and swallow trash whole.

Garbodor and their pre-evolution, Trubbish, are known to be prey of Alolan Grimer and Alolan Muk. In fact, it was revealed that the latter's importation to Alola reduced thir population, but made those that remain stronger than Garbodor who live in other regions.

Garbodor belches poison gases from its mouth. By eating garbage, it creates new kinds of toxic gases inside its body.

The poisonous liquid that Garbodor produces contains a toxin so potent that anyone who gets a tiny bit of the liquid on their skin will experience life-threatening side effects, and can be fired from its right arm. As shown in one instance, the toxin can clog said arm and cause it to swell up, giving it discomfort.

In the Galar region, certain species of Garbodor are capable of Gigantamaxing. When it Gigantamaxes, the toxic gases that Garbodor secretes solidifies further and are released from the mouth and fingertips. The toxic gases are extremely potent that they can bore through human bones.

Garbodor is the evolved form of Trubbish as of level 36.

Garbodor seems to be based on a monster that has been mutated from the toxins within a garbage bag. The little ruffles of trash on its head may reference dust bunnies, seeing how they slightly resemble bunny ears or clumps of lint. Just like Weezing and Muk, Garbodor is based on pollution (landfill pollution in this case). It would also resemble Hedorah, a pollution kaiju from the Godzilla series.

Garbodor is a portmanteau of garbage and odor.

Its Japanese name, Dustdas, comes from dust (which is also used as a term to refer to garbage in Japan) and dasu (to exert).

Its French name, Miasmax, comes from miasma (unpleasant) and maximum. 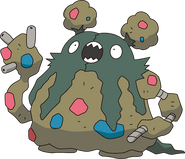 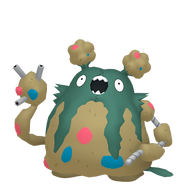 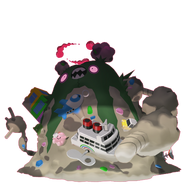 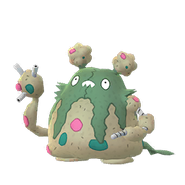