A Game Boy Advance (also known as GBA) is a game console by Nintendo that's SP version plays the Generation III Pokémon games, as well as other games that fits in its cartridge. It also has a third design, the Game Boy Micro which cannot play Game Boy and Game Boy Color games.

The Game Boy Advance is the upgraded version of the original Game Boy and Game Boy Color created by Nintendo. It has much improved graphics and is much more portable. 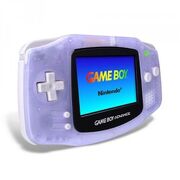 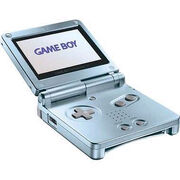 Game Boy Micro.
Add a photo to this gallery
Retrieved from "https://pokemon.fandom.com/wiki/Game_Boy_Advance?oldid=1262889"
Community content is available under CC-BY-SA unless otherwise noted.