Template:Gallade Gallade (Japanese: エルレイド Erlade) is a dual Psychic/Fighting-type Pokémon introduced in Generation IV. It is the counterpart to Gardevoir, and an evolved form of Kirlia.

Gallade somewhat shares a resemblance to his female counterpart Gardevoir, but is different in many ways. The "skirt" of his pre-evolved form is now gone, revealing his legs, which are now much wider. The red horns that were on his head have moved down to his chest, like that of Gardevoir, but are much sharper. His head is also similar to that of a Gardevoir, but he instead has a large gray-blue horn resembling a gladiator helmet. Another notable feature is the blade-like protrusions from his elbows, which Gallade can use as swords. It seems that the sharp protrusions can be extended and retracted when necessary. The shiny version of Gallade has a blue coloring where the original has green, and his "helmet" becomes silver instead of light blue. He also has a slightly purple colored hue.

Gallade are noble Pokemon that protect the weak and are talented at etiquette and "fencing", as well as they can do anything to defeat their enemies.

Gallade have the ability Steadfast, which allows their speed to increase x1.5 if they flinch. As Mega Gallade, he has Inner Focus, which makes any move that attempts to flinch Mega Gallade, such as Fake Out, completely useless.

Gallade made its anime debut in "A Grand Fight for Winning", and it made an appearance in the movie The Rise of Darkrai. Zoey also has a Gallade, which she used in her Grand Festival match against Dawn.

Gallade is based off a knight. 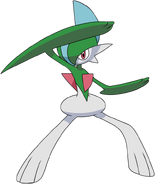 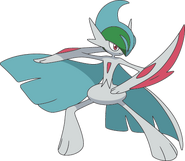 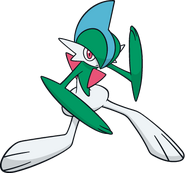 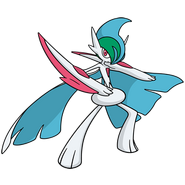