You're a Star, Larvitar!
ヨーギラスがんばる！

On their way to Mt. Silver to return Larvitar to its mother, Ash and co. decide to rest and give Professor Elm a status update on the Larvitar. They also meet a boy named Satchel, who is training really hard for the Silver Conference and has a battle with Ash. Can Ash consider this a "warm-up"?

The heroes contact Prof. Elm, reporting they came to the base of Mt. Silver. Larvitar observes the trainers, who came for the League. Elm sees Larvitar gained confidence and asks Ash to look for the Pokémon Preservation Center and find Mason. Elm logs out, while a trainer asks for a challenge. The trainer is Satchel, who sends Magby, while Ash sends Cyndaquil, as he wants to work out on situations like these. Magby starts with Flamethrower, but Cyndaquil dodges and hits Magby with Quick Attack. Cyndaquil hits it with Swift and uses Flamethrower, though Magby uses the same attack to counter it. However, Cyndaquil fails, but dodges Magby's Flamethrower.

Cyndaquil goes to tackle, but Magby conjures illusions via Double Team. Cyndaquil goes to stop the illusions, but the real Magby uses DynamicPunch, defeating Cyndaquil. Satchel admits Cyndaquil is a powerful, trained Pokémon. Ash compliments Satchel's Magby, while Satchel plans on evolving it. Ash thinks Magby is still strong without evolving, but Satchel knows there will be much stronger Pokémon in the League. Satchel is still pleased about the battle and thanks Ash for it. Later, Ash sees Cyndaquil is still powerful in defensive strategies, but hopes it'll be enough for the League. He spots a man training his Quilava, Cyndaquil's evolved form. Ash remembers Satchel's words about evolved Pokémon in the League and sees they need to work much more.

As Misty and Brock feed Togepi and Larvitar, Ash passes by with his Pokémon, determined for some special training. As Team Rocket watches their enemy marching with his Pokémon, Jessie points at some trainers with their Pokémon for the League. So, they plan on catching all these "fighting machines". Ash orders his Pokémon to train dodging and improving their attack power. As Misty and Brock admire Ash's will for training, they see Larvitar is gone. Larvitar wanders and encounters a Voltorb. The trainers gather around Larvitar, so Misty and Brock come. However, the Pokémon, including Larvitar, get sucked into Team Rocket's machine. Ash saves Larvitar, while Bayleef uses Vine Whip to bind him, preventing him from being sucked into the machine.

Cyndaquil uses Flamethrower, but Team Rocket absorbs it and Ash, while Larvitar hangs on the hose. Team Rocket flies away, while Misty, Brock and Satchel try to follow them. Meanwhile, Meowth drops the Pokémon into the truck, while Jessie leaves the twerp alone in a shack, tied by ropes. Team Rocket admires the Pokémon they caught and go to drive off in a truck. Larvitar comes and bites their tire, then digs out into the shack. Brock, Misty and Satchel report nothing, so Brock suspects Team Rocket is not using their balloon. James is surprised, as he checked the tires before, but Jessie wants the problem to be fixed. Larvitar chews off the rope, freeing Ash.

Ash clarifies it shouldn't have come, as it could've been in danger, but still appreciates it trying to save him. James and Meowth change the tire, while Larvitar digs and comes to the Pokémon. Per Ash's instruction, Cyndaquil and Magby use Flamethrower to melt the glass. Team Rocket goes into the truck, but Larvitar manages to bite off the tire once more. So, Meowth and James change the tire once more. Noctowl comes to Misty and Brock, reporting it found Team Rocket. Magby and Cyndaquil managed to melt the glass. A Quagsire got stuck, so the Pokémon push them out. Team Rocket heard that and go to investigate. Jessie finds the hole in the glass, then finds Cyndaquil and Magby, who use Flamethrower on her.

The Pokémon escape and gather near Ash. Team Rocket is angered, as the twerp stole the stolen Pokémon. Ash is even more angered, as they stole the Pokémon in the first place. Jessie sends Arbok, who goes to use Bite and James sends Weezing, who goes to tackle the twerp. However, Noctowl appears and saves Ash, hitting the Pokémon back. Arbok uses Poison Sting and Weezing uses Sludge, but the attacks get canceled by Magby's Flamethrower. Phanpy tackles Arbok and Weezing, while Totodile chases them off with Water Gun. Jessie tosses Arbok away to Headbutt, but Arbok gets hit by Magby's DynamicPunch. After the attack, Magby evolves into Magmar.

Arbok and Weezing go to attack Magmar, who uses Flamethrower on them. Cyndaquil uses the same attack, blasting Team Rocket off. The heroes are pleased that Magby evolved, while Ash thanks Larvitar for assistance, while the trainers obtain their Pokémon back. The heroes part ways with Satchel, who goes to the League, while Ash has to deliver Larvitar. Misty and Brock think Ash will have to fight Satchel, but Ash knows he will fight anyone, as he has trust in his Pokémon, who have skills, courage and heart. Ash lets know Larvitar they are near its birthplace.

"Team Rocket! I'm taking these Pokémon back with me!" - Ash
'Lar!" - Larvitar
"Well, for your information, stealing stolen property is still called theft!" - Jessie
"We have no patience for thieves stealing from thieves!" - James
"Dat's right!" - Meowth
"YOU'RE THE THIEVES THAT STOLE THEM IN THE FIRST PLACE!!!" - Ash
"Wobbuffet!" - Wobbuffet 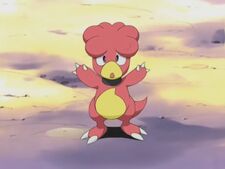 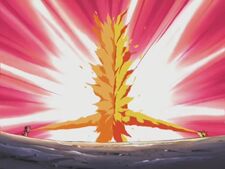 Cyndaquil and Magby use Flamethrower on each other 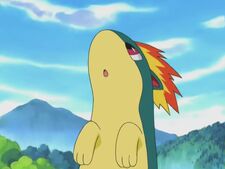 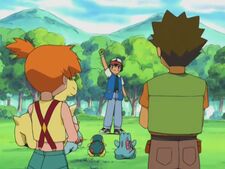 Ash goes with his Pokémon for special training 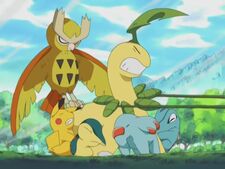 Ash's Pokémon attempt to pull their master out 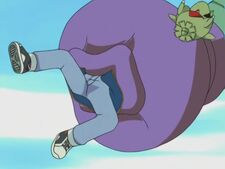 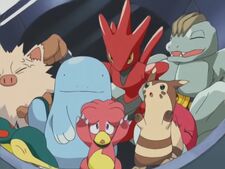 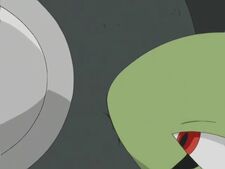 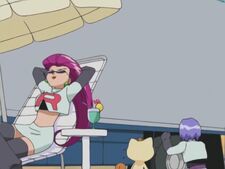 Jessie orders Meowth and James to fix the tire 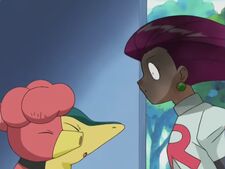 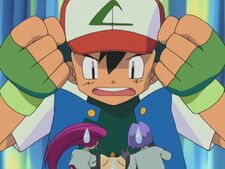 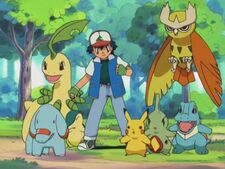 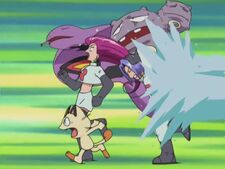 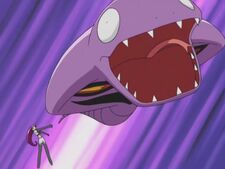 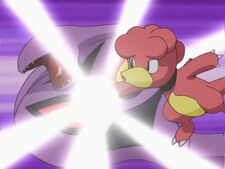 Magby evolved into Magmar
Add a photo to this gallery
Retrieved from "https://pokemon.fandom.com/wiki/GS146:_You%27re_a_Star,_Larvitar!?oldid=1287067"
Community content is available under CC-BY-SA unless otherwise noted.