The time has come once again for the last time. After calming the Dragonite and restoring peace to the Holy Land, Ash once again battles Clair. And it shows that he has learn a thing or two from the previous battle with her and has some surprises in store for her as well. Aside from Pikachu, Ash brings in Snorlax, which he hasn't used since the Sumo Match, and Charizard. Will Ash rise to the occasion and win his eighth badge?

Ash has his final battle with Clair, the rules being the same as the previous match. Clair sends out her Kingdra, so Ash knew she'd do that and sends his Snorlax, claiming he retrieved it yesterday. Snorlax starts with Hyper Beam, but misses due to Kingdra's Agility. Kingdra strikes with Swift, but Snorlax is not hurt, so uses Body Slam. Kingdra repeats Agility and attacks Snorlax, who is not yet hit. Kingdra uses Hydro Pump, which hits Snorlax and uses Hyper Beam on it. Liza gives her Charla some food to eat, while she goes to watch the Gym battle.

After the attack, Snorlax appears, as it dived to evade the attack. Snorlax uses Body Slam and hits Kingdra, who slips out, as they are in water. Clair declares when Snorlax comes out of water, Kingdra will use Hydro Pump. Snorlax jumps out and leans, avoiding any damage from Hydro Pump. Kingdra uses Swift, hitting Snorlax in its face. Kingdra uses Hydro Pump, hitting Snorlax. However, Ash sees Kingdra is exhausted, so Brock sees Snorlax's endurance is the key point in this battle, so Misty knows Snorlax will take hits. Kingdra uses Hyper Beam, but Snorlax dives to dodge. With Ice Punch, Snorlax defeats Kingdra.

Clair calls Kingdra back after being defeated, while Liza arrives to watch the battle. Brock attempts to flirt, but Misty pulls his little ear. Team Rocket digs a tunnel, for another attempt to get the Dragon Fang. Meowth sees the map and thinks the Dragon Fang is nearby. However, water begins to flow out, as Team Rocket is washed away, since they were digging under the lake. Clair sends out Gyarados, so Snorlax starts with Hyper Beam. However, Gyarados' Hydro Pump cancels the attack and hits Snorlax. Snorlax goes to use Hyper Beam, but fails and gets hit by Dragon Breath, which paralyzes it. With a Hyper Beam, Gyarados defeats Snorlax. Clair praises Gyarados and tells Ash that evens the score.

Meanwhile, Team Rocket uses a machine to dig through, while they relax. The machine found something, so Team Rocket goes out and finds Charla. Jessie thinks they should pull out this Charizard's fang, but they all blast off by her Flamethrower, leaving a bag of cookies, which a Pokémon takes. Clair sends her last Pokémon, Dragonair. Pikachu starts with Thunderbolt, but Dragonair dodges. Once it is enough to the ground, Pikachu uses Quick Attack on Dragonair. However, Dragonair dodges and retaliates with Hyper Beam, defeating Pikachu. Ash gives Brock his Pikachu to watch during the match. Ash sends out his last Pokémon, Charizard.

After the field clears, Dragonair is defeated. Ash hugs Charizard, while Clair calls Dragonair back. Misty, Brock and Liza congratulate him, while Clair and Kaburagi are impressed, so Ash is given the Rising Badge. Ash is glad, as he has all eight badges. Later, Ash thanks Charizard, who goes with Liza and Charla away. The heroes, Clair and the old man wave goodbye to them. 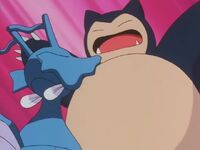 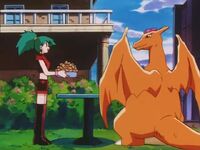 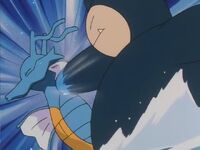 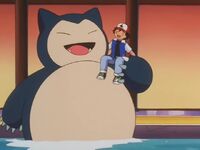 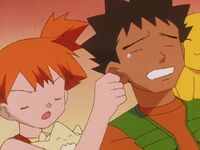 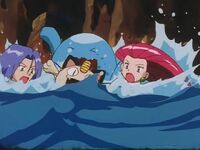 Team Rocket gets swept away 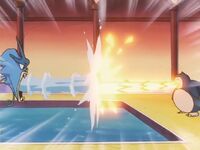 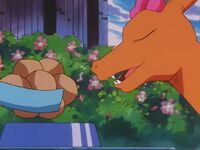 A Pokémon takes away Charla's food 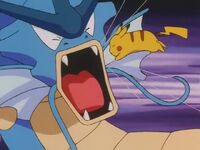 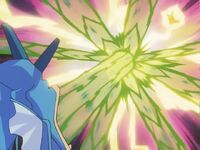 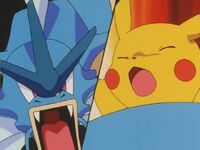 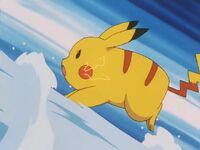 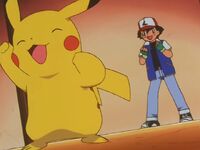 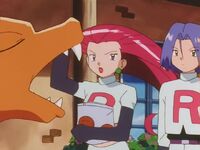 Charla is about to blast Team Rocket off 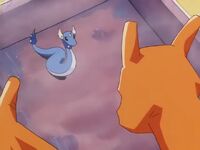 Dragonair is out of water to hide to 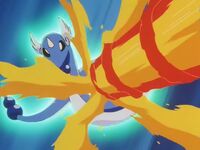 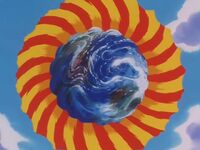 Charizard goes to use Seismic Toss 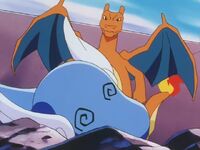 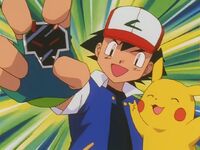 Ash won his last badge
Add a photo to this gallery
Retrieved from "https://pokemon.fandom.com/wiki/GS138:_Better_Eight_Than_Never?oldid=1287061"
Community content is available under CC-BY-SA unless otherwise noted.