For other title cards, see here
Don't Touch That 'dile (ワカバタウン！はじまりをつげるかぜのふくまち！; Wakaba Taun! Hajimari o Tsugeru Kaze no Fuku Machi!; New Bark Town! The Town Where the Winds of a New Beginning Blow!; lit. "New Bark Town! The Cold Town That Connects the Beginning!") is the 1st episode of Pokémon: The Johto Journeys.

Ash begins his journey in Johto, a largely unexplored region said to be thickly populated with Pokémon entirely new to him and his friends. After they briefly encountered a legendary Pokémon, Suicune, Ash and his friends arrive in New Bark Town so Ash can register for the Johto League. However, one of the three Johto starter Pokémon, a Totodile, has been stolen by Team Rocket from Professor Elm's laboratory (and it chomps down on Jessie's hair). Will Ash save the Totodile? And will he get to register for the Johto League?

As the heroes wander through a forest, Pikachu points at a branch and Ash recognizes it from before. Misty gets annoyed, as they have been walking in circles and chides Ash for not knowing where they are going. Ash responds that he will allow Misty to be in charge. Misty turns around and thinks, so Ash teases her, as they are waiting. Misty yells, so Brock separates them, knowing yelling does not solve anything. Suddenly, Togepi goes out of Misty's hands and walks away. Pikachu and Ash follow it, only to see a strange luminous thing at a lake. Brock and Misty recognize it is a Pokémon, who jumps away. Ash goes to it, but falls down a cliff, with Togepi, Pikachu, Brock and Misty falling down as well. Jigglypuff appears and does the same.

Team Rocket wander in the fog, but after it is lifted, they run to get lunch but stop. They see a big building and think there is food inside, but get scared away from a flock of Fearow. They enter a building and hear a man looking at a microscope, thanking them for coming to see the Pokémon, mistaking to be Nurse Joy. Jessie responds it is not a problem, reprimanding James, as she wants to impersonate for their advantage. Elm tells she should check on Totodile. Suddenly, Meowth yells, so Jessie and James shut him up, seeing a Pokémon bit his tail. The Pokémon uses Water Gun on James, soaking him. Jessie tells she will take it to the Center, so Elm thanks her. The heroes are exhausted, but see their destination - New Bark Town. Misty thinks they could see the Pokémon they saw in the woods. Ash thinks of it and hears Brock reciting the motto of the town - "the town where winds of new beginning blow".

Ash already feels the crowd cheering for him at the League and is confident. Misty is taken aback, so Brock explains he is ready to overcome any obstacle to achieve his ultimate destiny. Ash goes away, but Brock stops him, as he needs to register for the League. Ash asks if he has money if there is a fee, making Misty and Brock annoyed at that sentence, as he does not need money. They go away and Misty thinks there is a Nurse Joy in the Center, making Brock blush. At the Center, Brock asks for Nurse Joy to come, but Chansey appears. A screen comes down and Nurse Joy appears, telling trainers she is over at the lab and will come about two o' clock. Ash and Misty are surprised, as it is 3:30 already. Ash and Misty go to wait, but Brock yells, as they need to search for her since she might be in trouble.

At the lab, the gang sees police around it. Brock sees Officer Jenny and goes to give her flowers, but Misty pulls him away. Ash asks Jenny where if Prof. Elm's lab, so she replies they are standing in front of it. Brock tells there is trouble and runs inside, so Ash and Misty follow him. Joy scolds Elm, who lost Totodile, who was to be given to a trainer. Elm apologizes, but Joy does not accept it, as he should've seen things around him. Brock appears and flirts with her, but Misty stops him. Ash goes to explain Joy why they are here, but Jenny stops them all, as it is an investigation, since someone stole a Pokémon. They see Cyndaquil, who gets its flames on the back, lit, though Elm tells it is normal behavior. Elm tells them the trainer can pick Totodile, Cyndaquil or Chikorita, although the latter was chosen by another trainer, while Totodile was stolen.

Ash recalls he could've chosen a Charmander, a Squirtle or a Bulbasaur back home, but he chose Pikachu. Elm sees he must've come from Pallet Town, to which Ash confirms, as Oak was the one who gave Pikachu. Ash tells that they are here so he can register for the League. Brock asks Elm if he knows Oak, to which Elm heartily confirms, as he was his student. As Elm explains Brock, Misty plays with Cyndaquil. Joy admits that despite Elm is a hothead, he is a Professor that raises good Pokémon. They hear Elm saying Oak is his enemy, as he had his studies based on Pokémon abilities and skills rather than Oak's research on relationships between Pokémon and humans. Ash tells Joy he came to register for the League, though Nurse Joy admits she lost track of time. Misty feels bad for the trainer that should've chosen the Pokémon. Ash remembers that he was so excited that he couldn't sleep the night before he had to choose his Pokémon, so he couldn't sleep. Misty sees it is then he slept 'till four the next day. Nevertheless, Ash and Misty agree to help catch the thief. A police officer arrives and shows them footprints. Team Rocket are running away, as Totodile bit Jessie's hair.

Growlithe and Pikachu track the thieves, while the gang follows them. Jessie is annoyed the Pokémon does not get off, but James and Meowth tell her to think it is a hair extension. Meowth goes to call the boss but gets hit, as Jessie hit him on the door of the phone booth. As Jessie and Meowth argue who should call the boss, James inserts a coin but forgot the boss' area code, so gets involved in the fight. Soon, they see the heroes tracked them. Jenny goes to arrest them, but they refuse. Ash tells them a trainer expects the Totodile and asks them if their consciousness bother them. Team Rocket do not think it does and tries to run away. Ash sends out Bulbasaur, who uses Vine Whip to get Team Rocket to trip over. James sends out Weezing, who engulfs the field in Smokescreen. Ash sends out Charizard, who blows out the smoke with a flap of its wings. Bulbasaur gets the Totodile, but it does not let go of Jessie. Bulbasaur pulls and gets Totodile.

Jessie remarks she has bad hair with split ends and after Meowth claws Jessie for worrying about her hair, she starts to fight with him. Jenny tells Growlithe to capture the thieves, but James has Weezing use Sludge to blind the Puppy Pokémon. James then sends out Victreebel to use Vine Whip but it eats James again as Jessie sends out Lickitung. Ash's Squirtle, who was sent out, uses Water Gun. Jessie sends out Arbok, who goes to attack with Weezing, Lickitung and Victreebel, but get blasted off by a combination of Pikachu's Thunderbolt, Charizard's Flamethrower, Bulbasaur's Razor Leaf and Squirtle's Water Gun. Team Rocket are terrified by them, but get blasted off by Totodile's Water Gun. The Gang rejoice retrieving the Totodile, as Jenny was disappointed that she didn't arrest Team Rocket. Brock flirts with Jenny and gets pulled away by Misty. Jenny thanks Ash for the recovery of Totodile, who will be obtained by the trainer, while Ash is glad he can register for the League. Ash contacts Oak, telling he has not yet registered for the League but shows him Elm, his colleague. This causes the heroes to sit on a bench since Oak and Elm have a big discussion.

Totodile walks away, but Joy gets him. Seeing Elm busy, Joy goes to register Ash for the League. Pushing the Poké Dex in the slot, and with everything fine, Joy welcomes him to the League. She gives him the guidebook, though Brock takes it instead. Misty asks how many badges does he need to enter the League. Joy knows there are eight badges and that they should go to Violet City. Ash already warns Gary, as he arrived to catch up with him. In the sunset, the heroes depart. Joy, Jenny and Elm thank the heroes and wave goodbye, while Elm has a feeling Totodile will bond with the new trainer like Ash and Pikachu have. As the heroes depart, the Jigglypuff follows them.

"[screams] Help! Let go! Get out of my hair, you filthy little...James, Meowth, get this disgusting thing off me! Hurry!" - Jessie
"Jess, that Totodile's really attached to ya!" - Meowth
"Just make sure it doesn't go to your head!" - James
"[laughs] Dat's a good one, Jimmy!" - Meowth

"By any chance, do either of you remember the Boss' area code?" - James
"Well, this must be some brand new experience for you." - Ash
"WE'RE NOT LOST 'CAUSE OF ME!" - Misty
"HEEEEEEEY! yelling never solves anything, so just calm down. you 2 need to learn how to be more mature like me." - Brock 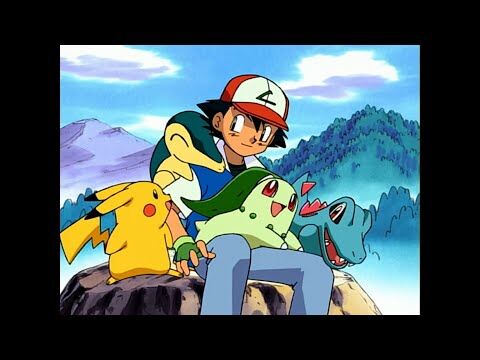 Misty gets surprised by Ash's confidence

Cyndaquil gets its flames burning

Jessie and Meowth attack James for attempting to call the boss

Totodile does not let go of Jessie's hair

Ash got Totodile back