Fuecoco is a small crocodilian Pokémon with a red pepper-shaped body and a pair of short stubby arms each with three claws. It also has two stump-like legs each with two black toe claws. Two yellow stems protrude from Fuecoco's head. Fuecoco also has two yellow patches on its belly and tail.

Fuecoco is described to be laidback and lives at its own pace.Fuecoco enjoys eating, and it will rush towards any food it sees.

Fuecoco is able to absorb external heat via the square scales on its stomach and back in order to produce energy. The scales are always warm and can increase to intense temperatures. The flame energy that Fuecoco produces is always leaking out. The more excitable Fuecoco becomes, the greater the amount of flames are released.

Fuecoco may originate from the Spanish words fuego (fire) and cocodrilo (crocodile). It may also incorporate cocoa, as its coloration and shape slightly resemble that of a cocoa bean pod. 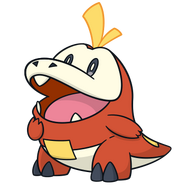 ← None | Fuecoco | None →
Español Français Nederlands Português do Brasil
Community content is available under CC-BY-SA unless otherwise noted.
Advertisement