Soul Badge
Fuchsia City is a city located in the southwestern part of Kanto. The Safari Zone is here with a zoo located close by. The Area's gym specializes in Poison-type Pokémon. Koga is the gym leader in Fuchsia City in the Kanto games; the Johto games see his daughter Janine take over the gym. In FireRed and LeafGreen, the move deleter is also present here.

This city appears in The Ninja Poké-Showdown when Ash faces Koga for his Soul Badge.

The warden's house (Gen I)

After retrieving the Gold Teeth from the Safari Zone, give it to the Warden, and he will offer an HM04 (Strength)

Entrance to the Safari Zone (Gen I) 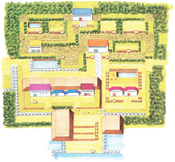 A tree containing a Burnt Berry

Fuchsia City in FireRed and LeafGreen

Fuchsia City in the anime
Polski
Community content is available under CC-BY-SA unless otherwise noted.
Advertisement