Frosmoth is a white moth-like Pokémon. It has 2 kimono sleeve-like arms at the front, while its wings interior and antennae's tips are transparent with a white flower motif. It also has heart shaped hands hidden inside its body fur. Its deep blue eyes give an impression of the sunglasses.

Frosmoth tend to attack those who vandalize natural environments with blizzards created by flapping its own wings. Like Vivillon, it scatters scales, but these scales have a snow-like texture.

Frosmoth may be based on the Winter moth. It also shares some similarities to the adult stages of the Jewel Caterpillar, the animal its pre-evolution, Snom, is based on. It may also be based on the larvae of the Arctic Woolly Bear Moth, who can withstand cold temperatures. Its size and green Shiny coloration may make it based on several species of silk moth. The fluff surrounding its neck resembles a large winter scarf or a blanket of snow. Its pre-evolution's appetite for snow and Frosmoth lacking a mouth-like feature may be based on different larvae or caterpillar species, some of which often eat large amounts of food before metamorphosing due to losing the ability to eat upon doing so. It may also reference an old method of removing clothing moth larvae from clothes, which is usually done through freezing the clothing or setting it in cold temperatures.

Frosmoth comes from "frost" and "moth".

Its Japanese name, Mosuno, is derived from "moth" and "snow". 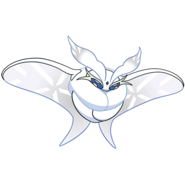 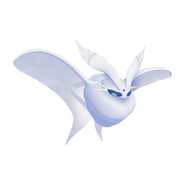