Froakie (ケロマツ Keromatsu) is a Water-type Pokémon introduced in Generation VI and is the Water-type Starter of Kalos.

Froakie is an amphibious Pokémon that resembles a frog. It has cyan blue skin covering most of its body, and a scarf-like collar of frothy white bubbles known as Frubbles (ケロムース Keromousse) around its neck. Its front feet are white, and it has a dark blue line on its back that extends vertically across its face. Notably, its eyes are large, protuberant and bright yellow. It has two Frubbles on its nose. Its back legs are long and powerfully-built for jumping.

The Water-type Pokémon Froakie is both light and strong, making it capable of jumping incredibly high. The Frubbles protect it from attacks. Froakie may appear absent-minded, but in truth it pays close attention to its surroundings at all times.

Froakie evolves into Frogadier at Level 16, and later on into Greninja at Level 36.

Trainers with a Froakie

Froakie is based on a frog, more precisely, a tree frog. Its bubbly and foamy scarf it has is based on "frog foam nests" that are often created as a nest to protect their eggs. Its foam also slightly resembles a backpack or a hood, a reference to the dorobō, where they often use bags of stolen goods as a hoody to conceal their identity.

Froakie's name comes from the animal frog, froth and croaky. It could also derive from coquí, a type of frog. -ie is commonly used as a suffix for something small and cute. 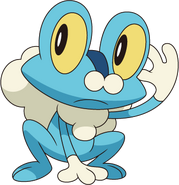 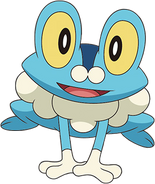 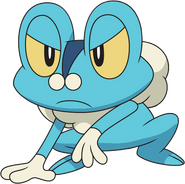 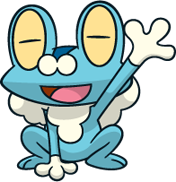 Froakie in battle.
Add a photo to this gallery
← Delphox | Froakie | Frogadier →
Retrieved from "https://pokemon.fandom.com/wiki/Froakie?oldid=1186473"
Community content is available under CC-BY-SA unless otherwise noted.