Fomantis has a small body with two light pink stripes and a big magenta stripe in the middle. For arms it has two light green small sickle-shaped petals with white tips and has a small green leaf collar around its neck. With a small pink head and magenta colored eyes and dark pink pupils. It also a big green leaf on its head with a dark green bulb behind it.

Fomantis are nocturnal, and in the daytime they can undergo photosynthesis while sleeping. As they know that staying in the same place they live will put themselves in danger, so they always move to another place after the sun sets.

It has the ability called Leaf Guard where the effects of status moves won't activate if the weather is sunny.

Fomantis evolves into Lurantis when it levels up to or past level 34 during the day.

Fomantis comes from faux (French for "fake") and mantis. 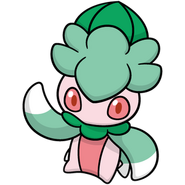