Flint in other languages

Flint is the third member of the Sinnoh Elite Four. He specializes in Fire-type Pokémon. He is a childhood friend of Volkner.

Flint has a red afro and gray eyes. He has a black choker around his neck and wears a yellow t-shirt with a high collar and gray baggy trousers. He also wears sandals.

Flint is a concerned yet good-spirited Trainer. He cares a lot about his friends, especially the once-depressed Volkner. He may be a little simple-minded, but Flint means well despite his tendency to be very casual in his attitude.

The name Flint name comes from "flint", a type of stone used to create sparks and thus start fire. 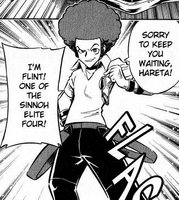 In a Multi Battle against Flint of the Elite Four and Volkner the Gym Leader
Community content is available under CC-BY-SA unless otherwise noted.
Advertisement