Pokémon Wiki
Register
Don't have an account?
Sign In
Advertisement
in: Male characters, Pokémon the Series: The Beginning characters

Flint is Brock's father and the former leader of the Pewter Gym.

Flint has tan skin and spiky brown hair. Like Brock, his eyes are closed. he wears a yellow t-shirt with rolled up sleeves, a black belt with a silver buckle, dark teal cargo pants, and black shoes. When disguising himself, he wears a red beanie, a fake beard, and white gloves. his clothing remains unchanged. In Grating Spaces, He wears a black blazer with a red turtleneck sweater underneath, khaki pants, and brown loafers. However, he goes back to wearing his original outfit at the end of the episode.

Flint has a rather strict and extrovert personality. Although, he cares much about his children as he decided to let Brock go on his own journey and take care of the gym himself. But he was afraid to face them earlier as he was unable to succeed in Pokémon training. He has a little bit of rude behavior too as he continuously scolded Ash on his immaturity. However, he later helps Ash and his Pikachu in charging up for the next bottle.

Ash came across Flint when he and Misty had just arrived to Pewter City. He welcomed them to Pewter City by informing Ash that he was sitting on his merchandise. Ash was later charged $2.00 for doing so. When Misty informed Ash of the Pokémon League, Flint underestimated his abilities. However, he later welcomes him to his house, and comforts him for his lost Gym Battle with Brock. He took Ash to his house and showed Brock taking care of his eight younger brothers and sisters. He also explained that Brock's mother was sick and his father left home to fulfill his dream, only to fail and hide away in shame. He then helps Ash, and Pikachu by bringing them to an old power plant, so that Pikachu can charge up for the rematch battle. When Ash unofficially defeats Brock, he reveals himself to be Brock's father. He allows Brock to leave with Ash to fulfill his own dreams.

During Brock's time away from home in the episode, A Family That Battles Together Stays Together!, Flint allowed his wife, Lola, to redecorate the interior and exterior of the gym. Despite badgering his son to come back home to visit, he tries to chase Brock away, knowing his reaction. He fails to get rid of Brock and allows him to see the inside and outside of the redecorated gym. Flint also leaves out that Lola has filled the gym with water for her Pokémon to idle in. He explains to Brock that he tried to dissuade his wife from her actions, but she decided not to listen to him. Since Flint is the new gym leader, Brock forces him and his mother to fight for the gym. However, because his mother has all water-type Pokémon and his father has all rock-type, Lola wins. It also reveals that Flint has a Golem which is Graveler's final evolve form and is the only Pokémon he had. Before he marries his wife, Lola he actually fought Lola using Graveler but ends up defeated by Lola's Poliwag's Hydro Pump. During dinner, Flint had already decided to make the Pewter Gym into a two-type Gym causing Forrest to run away angrily. Brock also convinces him to make the Gym only rock-type as he tells him that his mother is now a Gym Leader causing Brock to challenge his mother. Flint also serves as an official judge during the one on one battle between Brock and Lola. When Brock wins against his mother, Flint apologizes to his wife and he also agrees to make the Gym into a rock-type Gym. The two ends up loving each other. He with his family are seen giving farewell to Brock when he travels to Hoenn.

In Grating Spaces!, he and Lola are having a vacation along with Brock's Ludicolo and they are unaware that their vacation privileges are made by two gym remodellers which is both Jessie and James in disguise. After Team Rocket is blasted off by Ash's Pikachu and Donphan's Thunderbolt and Hyper Beam followed by Brock's Steelix's Dragon Breath and Forrest's Geodude's Sandstorm. Brock angrily confronted his parents for their return and they apologized for not knowing about Team Rocket's plans. They are later seen giving farewell to Ash and his friends on the way to the Battle Pyramid manned by Pyramid King Brandon to get his final Symbol.

In Ancient Family Matters!, Brock reminds Byron who is the current Gym Leader of Canalave City and Roark's father as his own father, Flint after Roark explains to them about his father Byron who left Oreburgh City to become the Gym Leader of Canalave City to make Roark handling the Gym duties in Oreburgh City much to his disappointment and his reasons to visit his father is for their wedding anniversary with Roark's mother. After blasting Team Rocket off by Ash's Pikachu's Thunderbolt and all of Byron's fossil collections are falling into the ground, Brock rethinks about his family after Byron reveals he still cares for his family and his reasons he passed his torch to his son Roark as the Gym Leader of Oreburgh City much like how Flint passes his torch to his elder son Brock as the Gym Leader of Pewter City.

In the special episode of Diamond and Pearl, Flint is last seen with his family and Brock's Pokémon to watch his younger son, Forrest who is fighting against Nurse Joy to prove its worth as the Gym Leader of the Pewter City. Flint is in fact the previous Gym Leader of the Pewter City before he was succeeded by his eldest son, Brock and later his younger son, Forrest. 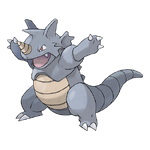 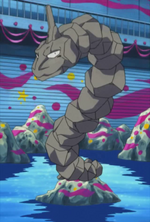