For the variant appearing in the games, see Flint (Sinnoh).

Double Trouble with Dialga and Palkia VI
Flint is a character appearing in Pokémon Adventures, who is a member of the Elite Four in the Sinnoh region.

He is shown to be close friends with Volkner just like in the game and anime.

Flint was talking with Volkner over the phone. Volkner described that he was going to Sendoff Spring by taking the Spring Path, until he encountered a big hole. Flint laughed, and asked Volkner what he had felt. Volkner admitted he felt joy, as he sensed a very powerful enemy he could battle. To that, Flint asked Volkner to team up to investigate, and admitted he was at the Battle Zone.[1]

Eventually, Volkner and Flint arrived with Magmortar and Electivire to the Fight Area of the Battle Zone.[2] Ever since they arrived to the Battle Zone, Flint and Volkner battled hundreds of trainers to grow stronger.[3]

Looker and Platinum remembered Flint, due to his powerful status, for he was connected to the rest of the Elite Four, as well as the Gym Leaders and the Frontier Brains of Sinnoh region.[4]

Volkner was with Flint, who received a call from Buck. Flint greeted Buck, and mentioned that he and Volkner were making research about Stark Mountain, and found a mention of a treasure: the Magma Stone. Flint went to warn Buck about the enemy, but the connection was severed.[5]

Volkner and Electivire looked at the group heading away, and wondered if Flint would follow them. He noted that there were a group of trainers from the battleground that were angry about Buck being hurt, and noted they weren't the only ones that were furious. Flint asked him not to remind him of that, for he and Magmortar swore to take vengeance on the man that hurt Buck.[6] The two looked to the sky, but found no interdimensional holes. Instead, they went into the Turnback Cave. Flint attempted to scare Volkner of monsters, to which Volkner punched him in the knee. Flint, however, claimed the following fight was not to get revenge for Buck, as they entered the cave. Volkner noted the fog, and sensed Flint was just excited, instead of scared. Flint confirmed his words, and the two turned around, as they were ambushed.[3]

Volkner and Flint were battling Giratina itself in the Distortion World. The two were having a lot of fun battling such a strong opponent, and decided to use stroger moves, even if they were risky. Volkner's Electivire used Discharge, while Magmortar used Lava Plume to attack Giratina, who resisted the attacks and hit them with Dreagonbreath.[7] When Giratina saw Dialga and Palkia, it ignored Volkner and Flint. The two guys were angry that it moved away from them, as their battle was not over yet.[8] Flint and Volkner had Magmortar and Electivire fire an attack at Giratina from the Distortion World. Giratina fell down, to which Volkner and Flint high-fived each other; the battle was concluded, and noted they really were strong trainers.[9] 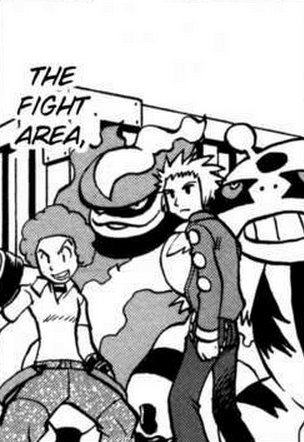 Retrieved from "https://pokemon.fandom.com/wiki/Flint_(Adventures)?oldid=1357916"
Community content is available under CC-BY-SA unless otherwise noted.