Fletchy mostly appears whenever Y is flying around in her Sky Trainer uniform. Fletchy is also around whenever Y goes to and protect her from any danger. When Y and her Fletchy were trapped in a house and were attacked by a Spritzee, Fletchy protected Y from Spritzee's attack. Fletchy later broke the window with its Peck attack and let Y escape from the house to help X from the attacks of Team Flare. Fletchy stayed behind and continued battling Spritzee. 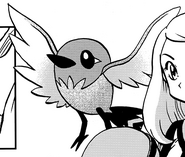 As Fletchling
Add a photo to this gallery
Retrieved from "https://pokemon.fandom.com/wiki/Fletchy?oldid=1423752"
Community content is available under CC-BY-SA unless otherwise noted.