Flapple is a green worm-like dragon with four apple peels attached to it; two as its wings, one on top of its head, and one at the bottom. It has yellow eyes and a spike on top of it head.

Its consumption of a sour apple has cause Flapple to undergo evolution. Its cheek sacs contain acid capable of causing burns and other chemical reactions. It is able to fly by flapping the apple skins and can fold them back to look like an apple.Flapple will hide in the branches of apple trees with their wings folded and their heads down to mimic apples. When unsuspecting bugs fly by, they will dissolve them with their acid before consuming their catches.Though resourceful, they are not particularly aerodynamic and must exert a lot of energy to stay aloft. For this reason, they prefer an ambush strategy when hunting and only fly when they need to relocate in search of better hunting grounds or escape from danger. In some regions, people dilute Flapple acid with water and add spices to create a refreshingly-tart beverage. This beverage can also be fermented to produce an alcoholic variant.

When exposed to Gigantamax energy, Flapple is able to create large quantities of nectar. It releases a strong scent from its extremely sweet nectar, causing other Pokémon to faint from a single whiff.

Flapple evolves from Applin when exposed to a Tart Apple. Along with Appletun it is one of Applin's final forms.

Flapple is based on the common depiction of a green worm inside an apple. It may also be a pun on the term "wyrm", a serpentine dragon, which sounds similar to 'worm'. It is also based on the Lindwurm, a green, serpentine dragon that lives inside of mountains. It may also take inspiration from depictions of snakes in the Bible, which are often called dragons, one of which tells Eve to eat the forbidden fruit from the Tree of Knowledge, often depicted as an apple. It may also be based on the Ladon, a dragon from Greek mythology that guarded golden apples. Its habit of spitting acid may reference amygdalin, a chemical in apples that releases cyanide.

Its signature move, Grav Apple, may be taken from a famous and debated story told about British physicist Isaac Newton, in which an apple falling from a tree (in some versions onto his head, but versions where Newton simply observes the apple falling exist) leads to his discovery of gravity.

While in its Gigantamax form, it resembles a caramel apple or some other form of sweet treat.

Flapple comes from the words "flap" and "apple".

Its Japanese name, Appuryu, comes from "apple" and ryu (dragon). 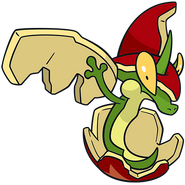 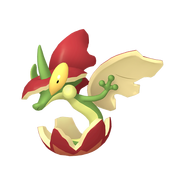 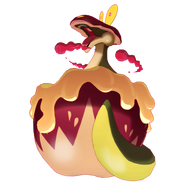