Flaaffy appears to a be a pink sheep that has wool on its back to its chin along with black stripes on its ears and its tail. It also possesses a blue orb at the tip of its tail.

Flaaffy has the ability Static along with the hidden ability Plus. Static gives the foe a 30% chance of paralysis if they hit Flaaffy with a Physical move. Plus boosts its Special Attack power if with in battle with another Pokémon with the ability Minus. If its coat becomes fully charged with electricity, it's tail lights up. It fires hair that zaps on impact.

Flaaffy evolves from Mareep at level 15 and into Ampharos at level 30.

Flaaffy is based on a sheep.

Flaaffy is a mix of the words fluffy and baa (a sound often associated with a sheep). It might also come from AA, like AA batteries. 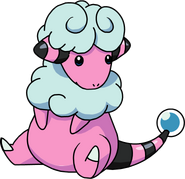 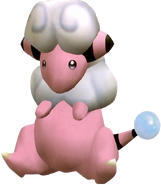 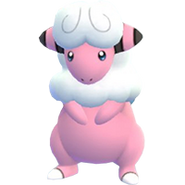 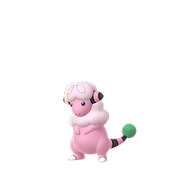