Ferrothorn is a large metallic Pokémon with a saucer-shaped body covered in green spines. It somewhat resembles a flattened durian fruit. Its metallic body is covered in sharp green thorns. It has three black stripes encircling its body; the middle stripe located below its eyes, is triangular. Its eyes have green rims, yellow scleras, and black pupils. There is a green spike at the top of its head. Long, thin green vine-like appendages tipped with spiky metal disks extend around it. Ferrothorn uses these spiny metal appendages to cling to ceilings of its cave habitat, or walk by slowly shuffling.

Ferrothorn dwell in mineral-rich caves, using their three spike-tipped feelers to cling to cavern ceilings and floors. To hunt, these creatures hang idly from the tops of caves, waiting for unsuspecting victims to pass underneath. When they come along, Ferrothorn fire barrages of spikes to subdue them before dropping down below to claim their meals. Ferrothorn will also scrape away at cavern walls to siphon exposed minerals and ores using their spikes. Their feelers are deceptively strong, capable of supporting their weight and allowing them to “stand” upright on the ground. In this stance, Ferrothorn can swing their feelers like flails to attack foes. The tips of these feelers are strong enough to pulverize stone.

Their hard, spiked bodies protect them from most attackers; however, they are also very sensitive to heat. Ferrothorn will seek shelter in the damp recesses of their caverns if they feel the air warming. Excessively heat can cause their normally-sturdy bodies to soften slightly, rendering them vulnerable to further attacks. Spelunkers in Unova's Chargestone Cave are advised to use torches instead of lamps in order to scare off wild Ferrothorn.

Ferrothorn is the evolved form of Ferroseed as of level 40.

Ferrothorn appears to be based on cockleburs or seeds from horse-chestnut trees as they both are durable and have spines on them. Given its Steel typing, it may also be based on a mace. It may be based on the tribulus species of plants, known for their thorns and sharing a Roman name with the caltrop, a spiky weapon. The vines protruding from it may be based on a sprout as its pre-evolution is based on a seed.

Ferrothorn comes from ferrum (Latin for "iron") and thorn.

Its Japanese name, Nutrey, may be a combination of nut, rey(Spanish for king) and trey(Italian for three anglicized, since it has 3 appendages). It may also involve 鈴(rei, bell). 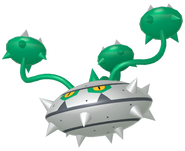 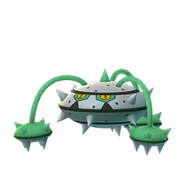