Farfetch'd is an avian Pokémon that bears a resemblance to a duck. It is brown in color; contrasted with a yellow bill and white underbelly. The wings of a Farfetch'd show a dexterous quality, as they are equally adapted to manipulate objects much like hands in addition of being used for flight. Farfetch'd has webbed feet, a characteristic common with most ducks. Its face is adorned with a black V shaped marking along with a trio of feathers that crown its head. It is also holding a leek stalk, which it brandishes as a weapon.

Prior to Generation VIII, Farfetch'd did not evolve. It was (before the release of Sirfetch'd) the first Pokémon in the Pokédex that does not evolve into or evolve from anything.

To evolve into Sirfetch'd, Farfetch’d must survive through multiple battles.

Farfetch'd is based on the Japanese saying "鴨が葱を背負って来る", which literally translates into "A duck comes bearing green onions".

Its name seems to be a word corruption of the word, "Far-fetched". Kamonegi (鴨葱) comes from 鴨, meaning "wild duck", and "葱", meaning "sprig onion". 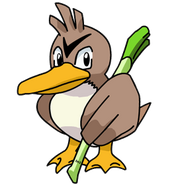 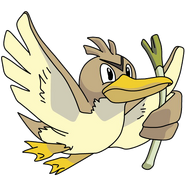 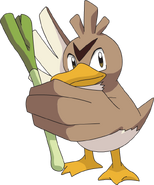 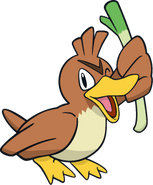 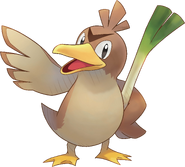 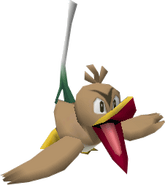 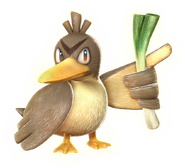 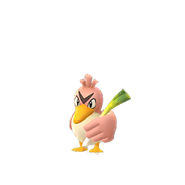