Acces from S.S. Tidal in Slateport City and Lilycove City

None
Faraway Island is an island situated outside of the Hoenn region in Emerald. This island is the location of Mew.

It is available only in Emerald. To get to Faraway Island, the player first needs to have the Old Sea Map (which can be obtained by either an event in 2005, or mix records with someone who has it). The player then needs to head to the ship house in either Lilycove City or Slateport City to talk to the lady that asks where to go, there should be a third option besides the original two options. After a conversation between Mr. Briney and a sailor, the sailor offers the player to go to Faraway Island.

Faraway Island is an incredibly-dense jungle island that is inhabited by one individual, the New Species Pokémon, Mew. 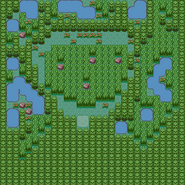 Artwork of May chasing Mew on Faraway Island
Community content is available under CC-BY-SA unless otherwise noted.
Advertisement