Fantina serves as the Gym Leader for the Hearthome City Gym. Fantina specializes in Ghost-type Pokémon, and holds the Relic Badge for the trainers that defeat her.

Fantina is a tall woman, who has purple eyes and hair, which is tied into four balloon-shaped pigtails. She wears a long purple dress, which is accented by white dots, and has a yellow X mark on her hip, which resembles a Drifblim's mouth. She also wears white gloves, a white muffler and purple high heels.

Eccentric, glamourous, stylish and highly refined. Fantina is a lady of talent, who is not only a trainer but also a great judge of character. She represents the lavish lifestyle of a French model, though she isn't snobbish about it. At times she includes French in her sentences, and enjoys quizzing her challengers before battle.

Fantina first appeared in the first Generation IV games as the Hearthome City Gym Leader. In Pokémon Diamond and Pearl, Fantina's Gym has several levels the player character must ascend. With each level there is a question to be answered, with three answers are located on three doors, they are usually associated with simple mathematics. Choosing the door with the correct answer leads to the next lift. Choosing the door with the wrong answer leads to a Gym member that the player character must battle.

In Pokémon Platinum, the gym setup is different. One must find a blue tile within a darkened room; then one has to memorize the pattern on that tile and go in the door with the red tile having the same pattern as the blue tile. If using the flashlight on a trainer, then one must battle them. All the trainers in the dark rooms all use Ghost Pokémon. Additionally, however, she was originally the 5th Gym Leader in the Diamond/Pearl games, but became the 3rd Gym Leader in the Platinum version. Due to this, her Gym team has been nerfed by 10 levels. 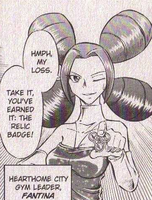