Thorton is a pale, teal-eyed man with black slick hair, with the top being green. Unlike most people, his eyes are always half-shut. He wears a teal tie, which has a white button, over his black shirt with white sleeves. Thorton wears a teal belt, green shorts and black shoes. Thorton also has some gadgets, which he usually keeps in a spare container around his waist.

Thorton is a knowledgeable analyst who is confident in his abilities and analyses. He has even invented a machine just to analyse the possibilities of the player winning against him. However, he acknowledges and appreciates the friendship between Pokémon and people, so he usually tells the player not to care about his machine's results too seriously.

He is mostly the same with Noland of the Hoenn region, his Pokémon are random. When rematched, it's highly troublesome, because the player character almost never notices a type frequency, which is the clue of the seventh set. He usually has at least one Legendary Pokémon. 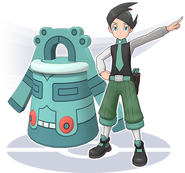 Add a photo to this gallery
Retrieved from "https://pokemon.fandom.com/wiki/Factory_Head_Thorton?oldid=1327157"
Community content is available under CC-BY-SA unless otherwise noted.