For the variant appearing in the games, see Factory Head Noland.

Factory Head Noland is a character appearing in Pokémon Adventures, who is the Frontier Brain of the Battle Factory in the Battle Frontier in the Hoenn region.

Noland is medium height and quite muscular. He has short spiky brown hair and quite prominent eyebrows over his brown eyes. He wears a puffy crimson red cap, a long white sleeveless coat which he leaves open over a sleeveless black shirt tucked into black trousers with a belt, and crimson red shoes which he tucks his trouser legs into. He also has some grey gloves.

Noland values knowledge; he wants to challenge his opponent to find how much knowledge they have. With his intelligence, Noland is also well-versed in logic.

Noland, along with the other Frontier Brains, appeared as a silhouette, as one of the trainers Emerald would face.[2]

Noland watched the demonstration battle of Lucy and Spenser battling an Electrode and a Swalot. He noted their Crobat and Seviper were at a disadvantage against the enemy's Swalot. However, Anabel reminded him Spenser's Spirit and Lucy's Luck were not something to be doubted of, since they won the battle. After the battle Scott introduced the Frontier Brains to the press, who came to write reports on the Battle Frontier before its opening. Suddenly, Emerald arrived and crashed the scene, which infuriated everyone.[3] The Frontier Brains tied up Emerald and wondered what they would do with him. The Frontier Brains made a deal with Emerald that they wouldn't punish him, as long as he challenges all seven Frontier Brains in seven days, before the Battle Frontier would be opened. Tucker wanted to challenge Emerald first, but Noland decided to battle the child, since he couldn't sense any knowledge coming from Emerald. Thus, he pushed him out of the tower, as Emerald went to the Battle Factory for the challenge the following day. After Emerald came to his facility, Noland showed Emerald six Pokémon, from which he had to choose three of them. Emerald did so and started the battle with holograms, since Noland wanted to see if Emerald could impress him by having a streak of 42 battles, else Noland would refuse battling him. After Emerald's first victory, Noland grew impressed, seeing Emerald understood the facility tested his knowledge on Pokémon.[4]

Noland continued watching Emerald's battles and became even more impressed at how much knowledge Emerald had. Seeing Emerald had four more battles left before facing him, Noland wrapped his eyes with a scarf, since he didn't want to know which Pokémon Emerald would use. After the 41st victory, Noland descended down, being the final challenger, who reminded Emerald he had to use all his knowledge to defeat the Factory Head. Noland had his Mawile punch Linoone, who secretly used Trick to let Mawile hold the Choice Scarf. Mawile used Iron Defense, protecting itself from Linoone's Frustration. Emerald sent Pinsir out, while Mawile was unable to use any other attack than Iron Defense, due to Choice Scarf's effect. Thus, Pinsir easily defeated Mawile, while Noland noted how knowledgeable Emerald was. However, Noland sent Golem out, who defeated Pinsir and Linoone quite easily. Noland showed Emerald the Knowledge Symbol he would obtain if he defeated Noland, who doubted Emerald would win, since he had one last Pokémon left to battle.[5] Noland tried to have Golem quickly defeat Emerald's Sceptile, but failed. Since Golem was quickly defeated, Noland sent Glalie out. Glalie attempted to freeze Sceptile with Ice Beam, but Sceptile evaded the attack with Detect. Thus, Noland's Glalie used Sheer Cold to immediately defeat Sceptile. However, Sceptile survived the attack and defeated Glalie with Iron Tail. Noland was astounded how much knowledge Emerald had and gave him the Knowledge Symbol. Though being overwhelmed by the press, Noland asked Emerald where he went wrong in the battle. Emerald replied Noland should've made better use of the items and combining moves with such items.[6]

After Emerald went out, he spoke with the reporter that followed him around, knowing Sceptile did not belong to the Battle Factory. He recalled how Sceptile resisted Noland's Glalie's Sheer Cold, showing Glalie was level 50 and Sceptile was level 51.[7] As Emerald took the Battle Pike challenge, Noland refused to watch Emerald's challenge. Instead, he did some research on the storage system. He spotted Sceptile was missing and suspected someone planted it in the Battle Factory. Just then, Noland got attacked.[8] Noland fell unconscious, while the figure went through the storage system, to find info on Jirachi.[9][10] Though he laid down wounded, Noland managed to get a sample of the sword's fragments while Guile was not watching.[11] The Frontier Brains found Noland and took him to the hospital, where he was bandaged up.[12] Once the Frontier Brains faced the armored man, Guile, in the Artisan Cave, they realized he was the one that attacked Noland and stole the rental Pokémon from the storage system.[13] The Frontier Brains approached Scott, who heard about the attack on Noland. However, he shook it off, thinking Noland should've been stronger to have withstood the attack.[14]

Noland approached his friends, since he came out of the hospital. He was told everyone went after Guile, though Noland admitted he found some new information. He claimed the sword Guile wielded had the power to reflect the enemy attacks. He exclaimed they had to find a new tactic to battle against Guile. Scott saw Noland had some valuable information and gave him the Jirachi report. Later, Noland was doing research on the report, while Brandon arrived to give him some coffee. While Brandon thought of the wishes Jirachi could fulfill, Noland read about a person witnessing Jirachi's power, who awakened from a 1000 year slumber. Noland read the text exclaimed the word "eyes". Thinking the person did something to get Jirachi's attention, Noland read the part about the "third eye". Noland realized if someone were to gain Jirachi's attention, Jirachi would open the eye on its belly and fulfill the person's wish.[15]

Eventually, Noland discovered a way to encounter Jirachi before Guile would. He came to the Battle Dome to watch Tucker battle Emerald.[16] During the battle, Noland explained he had his Smeargle copy Jirachi's Wish attack. The Smeargle used that move, showing a glitter of light, which Noland exclaimed it would appear along with Jirachi. After Tucker defeated Emerald, Noland saw some light atop the building. The Frontier Brains went atop the building and found Guile, who had captured Jirachi.[17] Guile also noticed Noland, whom he attacked in the Battle Factory. Noland also accused him of stealing the rental Pokémon. Guile laughed, claiming Noland was weak in that moment, but "thanked" him for letting him "borrow" the rental Pokémon. Guile sent his Starmie to attack the Frontier Brains, who defended themselves. However, Guile sent out the rental Pokémon from the Battle Factory, who attacked the visitors of the Battle Frontier. Noland tried to take care of the situation, but realized Guile wanted to use Jirachi to fulfill his wishes atop the Battle Tower. However, Noland wished he could've deciphered the final page of the Jirachi report. Still, he felt Guile didn't know the part about Jirachi's third eye on its belly, so he went to warn Anabel and Spenser of Guile's plan.[18]

Noland couldn't contact Anabel, fearing she was captured. Soon, Guile met up with Emerald, as well as his "friends", Ruby and Sapphire, who came to join Emerald in his quest. Since they were chased by the rental Pokémon of the Battle Factory, the group went inside the Battle Tower. Since Emerald managed to calm down a Snorlax, a Mr. Mime and a Mantine, Noland let Emerald take those three Pokémon. Since Guile hacked into the system of the Battle Tower, the group had no choice but to take the stairs and battle things out.[19] The group saw Anabel at the end of the hall, who had lifeless eyes. Noland was worried and continued battling, using his Mawile. After a few battles, Noland realized they took the Battle Tower challenge, which required 70 trainers to be defeated. Seeing Scott or Anabel could trigger the challenge, Noland feared the latter was brainwashed. Noland wanted to know what Guile did to Anabel and was told Guile made an illusion of Scott to take Anabel away, while the rest battled Guile atop the Battle Dome. Noland was furious at Guile, and continued onwards to battle the virtual trainers. He also saw Ruby and Sapphire were doing quite well against the virtual trainers, noting that was the power of Pokédex Holders.[1] Noland arrived to the top and found Archie, who was Guile all along. Noland went to attack Archie, who showed he had Anabel hostage. He asked for the Jirachi report, knowing Noland had translated the last page. Noland, in frustration, handed over the report, while Archie had his Tentacruel threw Anabel away. Noland was frustrated the handed the enemy valuable information. Sapphire comforted Noland, since it was their time to attack. Thus, Latios carried Noland and Anabel away, while the rest faced Archie.[20]

With the flood raging as well, the Frontier Brains banded together to stop the rental Pokémon from attacking as well.[21] Archie was annoyed at how the Pokédex Holders were trying to defeat him, so he had the ocean Kyogre sweep away the Frontier Brains and Scott. This motivated Emerald to confess he actually liked his Pokémon and people that loved them.[22] After Archie was defeated, the Frontier Brains, along with Scott, survived sea Kyogre's attack. Despite having a lot of injuries, they were thrilled the threat was gone.[23]

A day later, after Emerald woke up, Spenser, along with the other Frontier Brains, approached him and thanked him and his friends for saving the Battle Frontier.[24]

Noland, along with the other Frontier Brains at the Battle Frontier, interrogated Team Aqua and Magma admins: Tabitha, Shelly, Courtney and Matt. However, the admins did not know where Zinnia went to.[25] 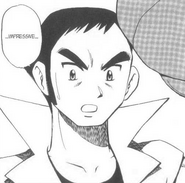 Noland without his hat
Add a photo to this gallery

Retrieved from "https://pokemon.fandom.com/wiki/Factory_Head_Noland_(Adventures)?oldid=1040833"
Community content is available under CC-BY-SA unless otherwise noted.