Faba is a character appearing in Sun and Moon and Ultra Sun and Ultra Moon.

Faba is a lean man, who has short green hair, green eyes and a goatee. He wears a white overcoat, bearing the symbol of Aether Foundation and having a yellow diamond-shaped decoration on his sleeves. Faba also wears a green undershirt, some green bracers on his arms, and large green glasses. He also has white boots with yellow soles and buttons.

Faba is extremely proud and vain, often talking down to his subordinates and continually accentuating his own skills and accomplishments beyond their actual merits. He is very insistent upon being addressed by his full title of Branch Chief and will ruthlessly defend his position. He will do whatever it takes to further his career, covering up his mistakes by lying or shifting the blame and switching loyalties when it suits him. He has been shown to not like children, the reasoning is unknown but he believes children should just do as adults say and keep it at that. He also runs a blog under the pseudonym, "F."

In Ultra Sun and Ultra Moon, after completing the main game, Aether Foundation is taken over by Team Rainbow Rocket. Faba stands in the player character's way to help Lusamine and they team up with Lillie to defeat Faba. Upon beating him, Faba once again admits defeat and after rescuing Lusamine, loses his rank drastically all the way down to janitor, making his employees higher than him. Faba then tries to make an effort in becoming an actually loyal crewmate of the Aether Foundation. 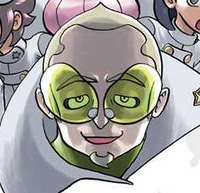 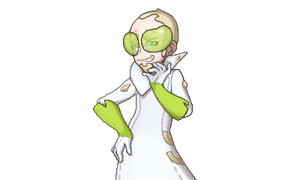 Faba's VS sprite in Sun & Moon