Eusine, also known as The Mystifying Trainer from Celadon City, is a Pokémon Trainer who has been searching for Suicune since his grandfather told him of the Legendary Pokémon.

Eusine is a tall man with green eyes and brown hair. His hair is combed back with one lock sticking out. He wears a short white cape, a large red ribbon on his neck, a purple suit with four violet rectangles on his chest and white sleeves with red spheres, a white shirt, a pair of white gloves and white shoes with brown soles.

He is first encountered in the Burned Tower with Morty. Eusine is an old friend of his, according to Morty. He is later battled in Cianwood City after spotting Suicune. After the battle, Suicune is seen in various places along with Eusine. After finding it enough times (scattered throughout some select routes), Suicune finally is seen on Route 14, where Eusine will wonder who would find it first. The last time Eusine will be seen is at Cerulean Cape, where the player character will get the chance to encounter and battle Suicune (having gotten there before Eusine). Even though Eusine feels envious, he believes Suicune respects the player character as a good Trainer, as shown by its eagerness to battle the player character, so he reluctantly backs down, encouraging the player character to battle Suicune. 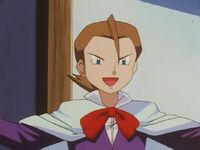 Eusine in Pokémon the Series (anime) 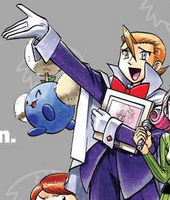