words "crystal" and other are used for conditional comparison

Outwardly, Eternatus is difficult to compare at least with something. Although this is the largest Pokemon, his entire body seems to consist of blue crystals, resembling, so to speak, the skeleton of a dragon with small gaps in the "bones" in which pink energy is visible. The head is shaped like a reptilian skull, with white eyes that look more like ovals. The mouth is at the bottom. The teeth are shaped like diamond-shaped crystals. The whole head is protected from above by a red translucent shield, which has 3 corners at the nose and 5 on the other side. Branches extend from the shield, attached to the "shield" with pyramid-shaped crystals, 2 on each branch, and then branch out as smooth, tapering towards the ends, processes with small gaps and pink energy, and the second part of the processes is connected to the corners at the end of the shield. There is also a small crystal near the nose in the middle of the shield. The rest of the body has a serpentine shape, like Chinese dragons, with "spikes" from below and above along the entire perimeter of the body. There are only 4 paws - 2 front and 2 back, however, Eternatus, in principle, does not need them, well, except for the front paws. On each (front) paw there are 3 fingers or claws, it's hard to say. A long crystal extends from the shoulders, which passes into crystals, resembling crystals on a shield. Both ends terminate in crystals resembling offshoots from the same shield. The longest crystal has 3 sharp crystals. All this forms the wings of Eternatus. The so-called "ribs" are built in the form of some kind of gun or laser of unknown origin. These "ribs" are lighter on the inside than on the outside. In the "ribs" themselves there is the "Eternatus Core". The hind legs resemble the bones of the hind legs (self-evident). The beginning resembles a hip bone, and the paws themselves, let's say, look very strange. The knee joint has 2 gaps with energy in them. Claws or fingers are simply impossible to describe. The tail looks like a body, but ends in 2 crystals.

No less strange and incomprehensible is his Gigantamax form, for which, in appearance, it can be classified as an Ultra Beast. It looks like a huge paw with a long "beginning", mostly made up of energy, and the crystals are minor, which is the complete opposite of its usual form. The energy itself looks like an incomprehensible pink substance with white grains and stripes on it. The head looks like a hand with incomprehensible crystals on the "fingers" and the center of the palm. The crystals in the center are most likely the mouth of this monster. Each finger is covered with crystals, similar to those that lined the wings. On top of each finger there is a sharp spike. To the ends of the fingers, the spikes are shortened. The body itself is twisted into a spiral and along the entire perimeter, except for the tail, is "dressed" in rings. The tail itself, in its appearance, resembles the same wings of Eternatus. In the center of the spiral is the Nucleus. Along the Core on the body there are sharp long crystals resembling a "fence".

Eternatus made a brief appearance in Flash of the Titans!, where it flew through the clouds next to the plane Ash Ketchum and Goh use to travel to Galar while passing by it. Similar to Zekrom, it attracts the high-level energy signature of Ash's Pikachu.

It returned playing a major role as one of the antagonists in a Pokémon Journeys saga based on the primary Sword and Shield storyline; it was eventually caught by Goh and sealed away in a safe.

Eternatus is based on various depictions of dragons, most likely the ones depicted in the United Kingdom (the region Galar is based on). It is most likely based on depictions of venomous dragons in folklore such as the one St. George had killed. It also resembles an ancient dinosaur skeleton. According to its etymology, it may be based on Thanatos, the god of death. Strangely, its bones resemble the armor of Necrozma, another extraterrestrial death-themed Pokémon who provided its generation's region with the energy needed for that generation's signature combat mechanic (Z-Moves in Necrozma's case, Dynamax in Eternatus's). Its multiple blank white eyes resemble those of Crocomire, a boss from the game Super Metroid.

It may also be based on the biblical Seven Headed Dragon that throws one-third of all stars down to Earth and is then banished, which leads to the end of all time. This may have inspired the Wishing Stars (the stars that fall down to Earth, with Eternamax Eternatus' "hand" resembling a giant star), the banishment (the player only being able to catch Eternatus and being unable to let it retreat), and the Darkest Day (the end of all time). Eternamax Eternatus is also depicted with several heads rather than the single head it has in its normal form, albeit it only sports five heads rather than seven.

In terms of genre analysis or "meta", or "fourth wall genre awareness", Eternatus likely draws upon classical fantasy motifs of slaying primordial and chthonic forces that threaten humanity, as to the Lernaden Hydra, Yamata no Orochi, and the Dragon slain by St. George, and to RPGs, to embody the form of a more traditional endboss that threatens the world and all who live in it. Finally, its Eternamax form harkens to the European art motif of the Hand of God, used to display God's intervention and His will to depict Him without displaying a tangible form, which was considered blasphemous in the Middle Ages. In turn with Eternatus' RPG Endboss theming, this may also be a throwback to the 1990s and early 2000s JRPG era, significantly to such series and installments such as Lunar, Grandia II, Final Fantasy X, Xenosaga, and Tales of the Abyss, which came to challenge religious fatalism and eschatological/end times zealotry.

Eternatus comes from the words "eternal", "aeternatus" (immortalized in Latin), and "Thanatus" (Thanatos in Latin).

Its Japanese name, Mugendaina, comes from the words "mugendai" (infinity), "dynamic", "die" (as it's a Poison type), and "Daimax" (Dynamax). 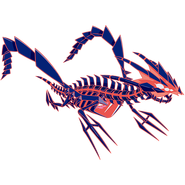 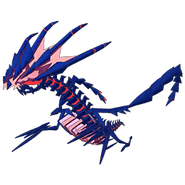 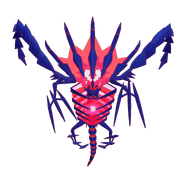