Espeon is a quadruped mammalian Pokémon with a cat-like appearance. Sleek and lilac/lavender purple fur covers its body. It has a red jewel encrusted on its forehead; this jewel glows whenever Espeon uses its Psychic abilities. Its face is distinctly cat-like with a short, blunt muzzle and a tiny, triangular nose. It has long pointed ears almost similar to a fennec fox, and whisker-like tufts of fur protruding from either side of its face just below its ears. Its eyes are deep purple and almond-shaped with white pupils. It has a slender tail that tapers into two ends, as if splitting into two.

Espeon uses the fine hair on its pelt and the gem on its head to sense air currents and predict its opponent's next move as well as the weather.

Espeon has very high Special Attack and Speed stats. However, all of the other stats are near average.

Espeon is one of the eight evolved forms of Eevee. Eevee evolves into Espeon by Leveling up with high happiness between 4 AM and 7:59 PM. In Pokémon XD: Gale of Darkness, Eevee can also evolve into Espeon by using a Dark Shard.

Red had an Espeon named Vee.

Like all Eeveelutions, Espeon shares traits with a variety of mammalian creatures. It is mostly based on a Nekomata, a two-tailed demon cat of Japanese mythology that holds a variety of psychic powers, which may include the ability to foresee the future or enter someone's dreams; and also an oriental cat due to its large ears and slender body or a caracal. Espeon's ears may have also drawn inspiration from a fennec fox.

Espeon's name is derived from ESP (Extrasensory Perception), which is the ability to see the future and "eon", as is followed by every evolution of Eevee. It could also be derived from "espionage" (which is the practice of spying to obtain information on an enemy, much like Espeon does by psychically predicting its foes next move with the gem on its forehead). 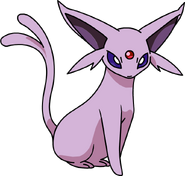 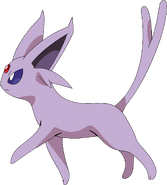 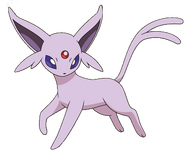 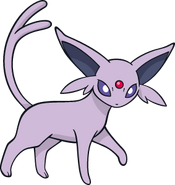 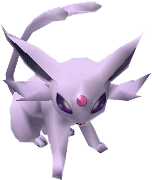 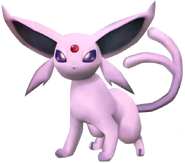 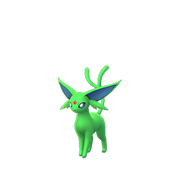 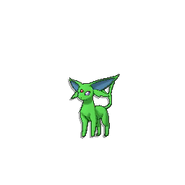