For the variant appearing in the games, see Erika.

Erika in Pokémon Journeys: The Series and Pokémon the Series: The Beginning.

Pokémon Journeys: The Series,
Pokémon the Series: The Beginning

Erika is a character appearing in Pokémon the Series, who is the Gym Leader in Celadon City in the Kanto region.

Erika has royal blue hair, which is styled into a short bob in a full fringe, while wearing her red headband. Her eyes are dark green. In her casual look, Erika wears a casual outfit as her primary appearance is a sea green short sleeved dress with an off-white design resembles a feminine symbol and red flats. She also has a small pink bow at the right side of her dress.

In Pokémon Journeys: The Series, the color of her hair changes from royal blue to dark brown and her eye color changed from dark green to gray. Her pale yellow kimono shirt and her red traditional long skirt resembles the hanbok worn by modern female Koreans in the 1800s and underneath is a gold kimono shirt. She also has a white and blue Poké Ball logo embedded on her kimono shirt.

Erika can be calm, but is not afraid to unleash her ire on those who, in any way, speak about her perfume in a negative manner, even using her status as a Indigo League Gym Leader to bar them access to the Celadon Gym to battle her for the Rainbow Badge if they disrespect her perfume but gives in because according to the rules of gym battles, the gym leader cannot bar a Trainer from a battle due to personal reason. During the battle, she teases him. She is shown as concerned when gloom isn't outside. She happily thanks Ash for saving gloom and even rewards him. She also reveals her playful attitude when Ash interrupts the moment.

The name Erika originates from "Erica", a genus of flowers, following her usage of Grass-type Pokémon and the common naming theme involving plants among most Gym Leaders.

While Erika was a little girl, she was protected by a Gloom from a Grimer. Erika also wasn't repulsed by Gloom's stench and befriended the Pokémon.[1]

Erika worked as a manager at a perfume shop in her hometown of Celadon City. Due to an insult of the perfume from Ash when he tried to stop Cerulean City Gym Leader Misty from buying any, Erika banned him from the shop. When Ash made his way to the Celadon City Pokémon Gym, he found out that he was indirectly banned from the Gym as well due to his earlier insults since the perfume is made in the Gym itself, and his pleas with asking to be let in fall on deaf ears. Following a plan made up by Team Rocket, Ash dressed up as a girl and re-introduced himself as "Ashley" to sneak into the Gym. He manages to get all the way in to find himself face-to-face with Erika, recognizing her as the perfume shop manager he offended earlier, but his disguise was ruined by Pikachu and he was exposed. Despite Ash's insult at her perfumes, Erika noted his determination and decided to battle him, obligated by her duties as an Indigo Pokémon League Gym Leader. Ash sent Bulbasaur against Tangela, who managed to affect Bulbasaur with Vine Whip and Stun Spore. Ash sent out Charmander, who took Razor Leaf attack from Erika's Weepinbell. However, Charmander defeated it with Skull Bash and Flamethrower. After Gloom was sent out, Charmander fainted from its smell, despite having the type advantage, so Ash sent Pikachu out after the two made up for when Pikachu took Erika's side regarding Ash's insults to the perfume earlier. Their match was cut short however, when Team Rocket decided to set fire to the Gym with a bomb in revenge for being kicked out earlier themselves, but not without escaping with what they thought was Erika's famous perfume first. Everyone made it out of the Gym with all of their Pokémon and attempted to fight the inferno until the Celadon City Fire Department arrived, until Erika realized that her Gloom was still inside. Ash then ran into the gym, braving the inferno to locate and save Gloom, despite being initially repulsed by Gloom's smell when he found it until he showed Gloom he was its friend, thus it no longer tried to repulse him with its smell. After the ordeal, Erika, relieved that her Gloom was alright, forgave Ash for his earlier insults and rewarded him with a Rainbow Badge for his heroic actions. She then revealed that the only thing Team Rocket stole from the Gym was a vital ingredient to her perfume: Essence of Gloom.[1]

While running away from his Pikachu, to have it stay with the other Pikachu and be happy with others of its kin, Ash recalled how Pikachu, who was with Erika and Gloom, found out Ash disguised himself as a girl to enter the Gym.[2]

Ash remembered Erika at the end of his journey through Kanto and Johto.[3]

Erika's silhouette appeared in Destination: Coronation! alongside the other Kanto Gym Leaders as the narrator explained how the Gym Leader system works in the Pokémon world.

Erika reappeared in PJ094, where she was reunited with Ash when she hosted a Pokémon Flower Arrangement class which Ash attended alongside Goh and Chloe 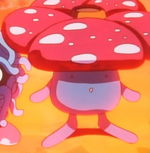 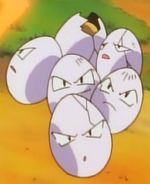 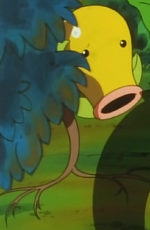 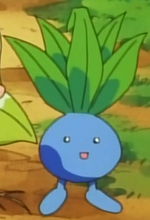 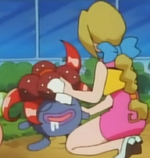 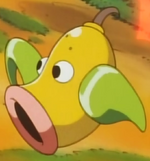 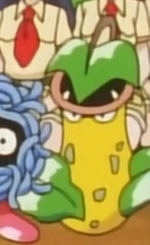 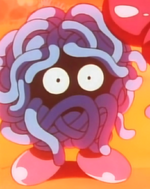 Erika as the perfume store manager

Erika in her normal clothes