Erika is a character that was introduced in Generation I. She serves as the Gym Leader of the Celadon City Gym. Erika specializes in using Grass-type Pokémon, and awards the Rainbow Badge to Trainers that manage to defeat her.

Erika is a slender young woman with pale skin and short black hair with cut bangs. Unlike most Gym Leaders, her eye color changes depending on the game she appears in.

Clothing-wise, Erika wears an extremely modest and conservative outfit; in fact, her outfit is among the most conservative of all the female Gym Leaders, with almost her entire body (save for her ankles, neck, face, and hands) being hidden beneath her clothes. The outfit consists of an elegant kimono with an obi (sash), a hairband, Japanese sandals called zōri, and traditional Japanese socks called tabi. However, like with every character that appears in multiple games, what Erika's outfit exactly looks like changes, though the crux of it is the same.

Additionally, while Erika changes her clothes and has been shown wearing casual outfits in the anime, she can never be seen wearing anything else other than her normal outfit in the games.

Erika, like her style suggests, displays a modest, elegant, and somewhat shy attitude towards the player. Erika is a graceful loser, she shows no ill-will about being defeated and cares deeply towards her Pokémon. She also has a habit of falling asleep in her Gym, but this is most likely because of being around Grass-type Pokémon.

In Pokémon HeartGold and SoulSilver, however, Erika appears to have a habit of spreading damaging gossip about the other Gym Leaders, especially Clair.

The name Erika originates from "Erica", a genus of flowers, following her usage of Grass-type Pokémon and the common naming theme involving plants among most Gym Leaders.

Erika's Gym is filled with grass, flowers and other plants. Additionally, everyone in the Gym is female. The player must use Cut in order to reach Erika in the Gym's center.

Upon defeating her in the Generation I games, Erika rewards the player with the Rainbow Badge, along with TM21 (Mega Drain).

Her role in Crystal is the same as it is in Gold and Silver.

Her role in FireRed and LeafGreen is the same as it is in Red, Green and Blu and Yellow.

Her role in HeartGold and SoulSilver is the same as it is in Gold and Silver and Crystal. 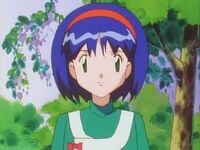 Erika in Pokémon the Series (anime)

Erika in the Masters trailer (anime)

"I would never collect Pokémon if they were unattractive."

"Rumor has it that if you peek into Celadon Gym, you can often see Erika snoozing."

"I am so glad that there are strong Trainers like you.
That awareness alone inspires and motivates me to try harder.
Please visit me again.
Zzz..."

Erika's VS sprite in Red & Blue

Erika's VS sprite in Yellow

Erika's VS sprite in FireRed & LeafGreen 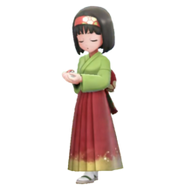