Erica is a character in Pokémon: Advanced Battle.

Erica won a Contest with Joshua. Since it was a tie, their ribbon was split in two pieces for both sides. However, Erica was amused and thought of winning more Contests with Joshua. After some training, Joshua decided it was time for them to split and train on their own, which crushed Erica, though she still fantasized about her and Joshua winning the Contest together.

Erica watched as Joshua was with May. Due to her jealousy, Erica came and accused May of stealing her "boyfriend", since Joshua mentioned May's Skitty looked cute, though Erica assumed he referred to May. Erica gazed at May, claiming that is what Joshua meant by training separately, thinking he fell in love with May at the first sight. Since May also wanted to participate in the Contest, Erica claimed May would likely lose. May decided to use Skitty, while Erica sent Jynx, whom she'd use in the Contest. As Team Rocket launched their attack, Erica was furious to see Joshua and May working together in the battle. She pushed May away and had Jynx use Hyper Beam, which blasted Team Rocket away. May was furious she got pushed away, but Erica claimed she still had a lot to learn, since she relied on Skitty's Assist attack. The two were reminded they had to register for the Contest, so Joshua, May and Erica went to the Contest Hall. During the first round, Jynx used Blizzard and Psychic, which made an icy tornado. While May was performing, Joshua clapped for her, but stopped when Erica gave him an angry look. At the end of the first round, Erica noted she would face off against the Jester (who was Jessie in disguise). However, she and May looked at each other with a determined glare, since their rivalry wasn't gone yet.

Erica faced the Jester in the next round. She sent Jynx against Meowth, whom the former tried to kiss. Meowth ran away and transformed himself into different Pokémon to bewilder everyone. However, once he transformed into a Wailord, Jynx used Psychic, causing him to accidentally pierce the inflatable costume. The Jester was disqualified by default, so Erica and Jynx won the battle. The Jester undisguised herself as Jessie, and along with Meowth and James, tried to snatch Jynx, who blasted them off. Erica went to the waiting room, from where she watched Joshua battled May. Though she believed May wouldn't last a chance, she was surprised when her Skitty actually endured the attacks and continued onwards. Seeing the battle, Erica thought Joshua and May were in sync and were meant for each other, even after Joshua was defeated. In the final round, Erica faced May and apologized to her for the trouble she caused earlier. May forgave her and they both shook hands to have a fair battle. During the battle, Jynx assaulted Skitty, who continuously used Assist to inflict Jynx with a variety of attacks. Jynx managed to inflict heavy damage to Skitty with Blizzard and even lifted her in air with Psychic. However, Skitty's Assist turned into Fire Spin, which negated Hyper Beam and burned Jynx, allowing Skitty to defeat her with Tackle. Though she lost, Erica congratulated May for the victory. Joshua also let her train with him, since he merely wished for a rival.

Before arriving to Slateport City for May's Grand Festival, she and Ash remembered their past adventures so far. May recalled facing Erica in the final round of the final Contest in Pacifidlog Town. The victory made May win the fifth ribbon and qualify her for the Grand Festival. 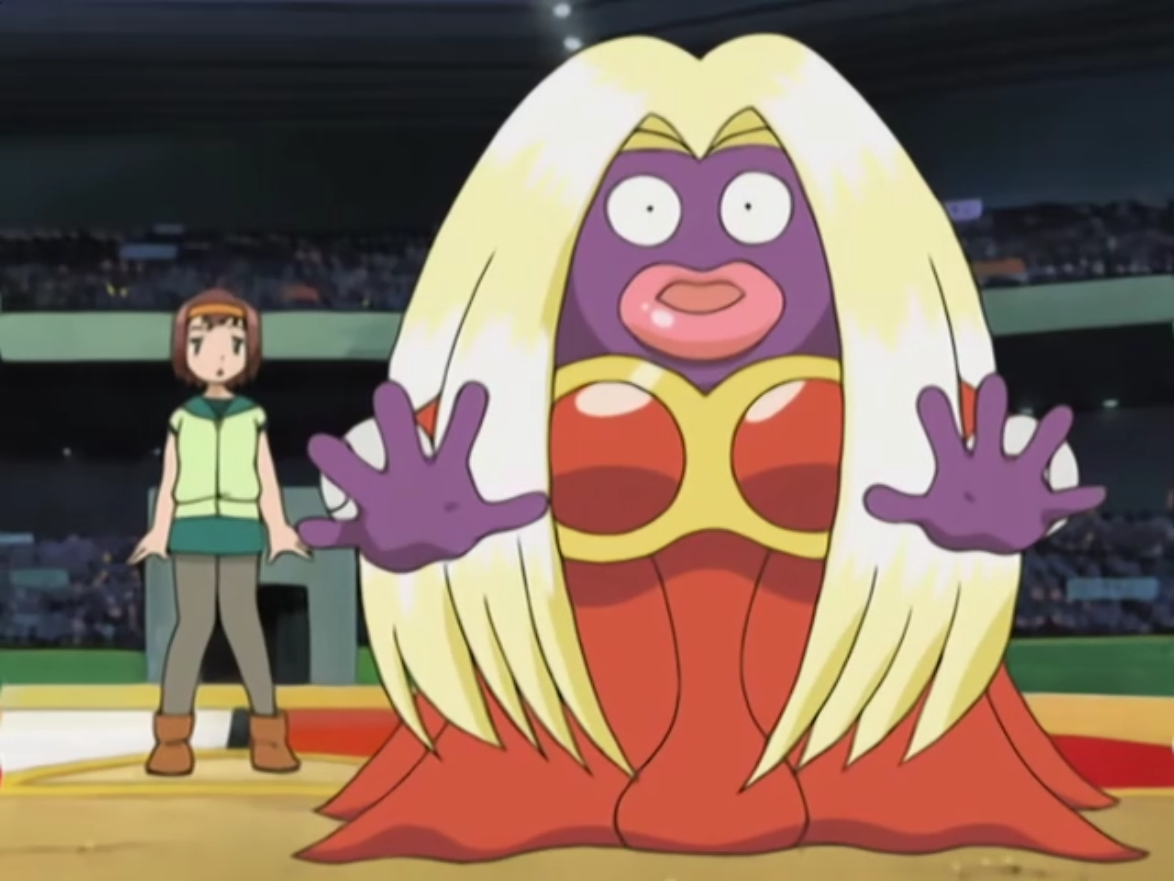 Add a photo to this gallery
Retrieved from "https://pokemon.fandom.com/wiki/Erica?oldid=1373058"
Community content is available under CC-BY-SA unless otherwise noted.