Brock
James
Butch
Eric Stuart is an American voice actor, voice director, musician, singer and songwriter who was one of the original voice actors of the Pokémon anime show and was a voice actor at 4Kids entertainment and at NYAV post. He has been the voice of Brock and James from Season 1 to Season 8. When Season 9 aired, he was replaced by Bill Rogers who took over the role of Brock and Jimmy Zoppi who took over the role of James. His voice for May's Squirtle in Mastermind of Mirage Pokémon was from an archive clip he had no actual participation in the dub like the rest of the 4Kids voice actors. He is the lead singer of his band The Eric Stuart Band.

From July 2006, according to this archive:

K-Zone: Pokémon has been around for 10 years and is as popular as ever. Do you feel honoured to have been a part of it?

Eric Stuart: I do. It's a great show to work on. The cast and production team are really special people. I'm honoured to have voiced some very popular characters in the toon world.

K-Zone: You get to play the good guy (Brock) and the bad guy (James from Team Rocket). Which is more fun?

Eric Stuart: That's a really hard question. I don't like to pick favourites. Brock is funny with his girl-crazy stuff, but James is much funnier overall. I think I actually laugh a lot more when voicing James.

K-Zone: Brock seems to be the wisest member of the gang. Is he a good influence on Ash?

Eric Stuart: I think he acts like a big brother to Ash. Though his girl-chasing is a little over the top, I think he keeps an eye on Ash and tries to help him make good decisions in his life. I think Brock would do anything for Ash.

K-Zone: Apart from Pokémon, what other series have you worked on? And which character has been the most fun?

Eric Stuart: Oh boy! Ok, I'll try to give you a list but don't hold it against me if I leave someone's favourite off! Here are the shows and the main voice I did for each one: Yu-Gi-Oh! (Seto Kaiba), Yu-Gi-Oh! GX (Bastion), Ultimate Muscle (Mac Metaphor), Funky Cops, TMNT, GI JOE: Sigma 6 (Hi-Tech), Kirby: Right Back At Ya! (Metaknight), One Piece (VP Schoople). Okay, you get the idea... My favourite role would have to be Seto Kaiba. He's a blast to do.
-Zone:How is voicing Pokémon characters different to doing other shows?
Eric Stuart: Pokémon has a lot of comedy and a good moral to each story. Some of the other shows are either very dramatic or really goofy. Pokémon has a nice balance.

K-Zone: What's something that most Pokémon fans don't know about the series?

K-Zone: And finally, who's your favourite Pokémon?

Eric Stuart: Squirtle. He was the first one I voiced. 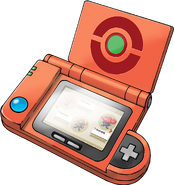 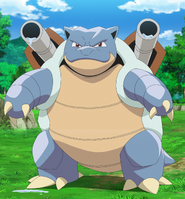 Magmar
Add a photo to this gallery
Retrieved from "https://pokemon.fandom.com/wiki/Eric_Stuart?oldid=1125890"
Community content is available under CC-BY-SA unless otherwise noted.