The Eon Duo contains Latias and Latios. They are a pair of Legendary Pokémon that appear in the Hoenn region. Unlike many other legendary groups, Latias and Latios each have genders, and they share the same type and abilities, as well as having a mutual held item: the Soul Dew. The only non-visual differences between the two of them are their movesets and the distribution of their stats. According to the fifth Pokémon movie and several games, Latias and Latios are considered brother and sister. 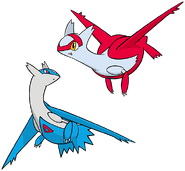