Enamorus (ラブトロス, Rabutorosu) is a Fairy/Flying-type Legendary Pokémon introduced in Generation VIII. It is a fourth member of the Forces of Nature along with Tornadus, Thundurus, and Landorus.

Enamorus is a pink Pokémon with four red horns and markings on its body. It has white hair on its head resembling a heart. Its eyes are yellow and it has small pupils. It has a long, brown tail resembling a snake with red heart shapes on it.

In Incarnate form, it is somewhat feminine humanoid, and it has white lips. Its lower torso consists of a cloud.

In Therian form, it becomes turtle-like in appearance. The end of its mouth is heart shaped. The tail resembles the shell, and the rest of its body is inside of the cloud.

Enamorus flew in from the north every year at the end of winter, bringing life-giving spring rains as it traveled across the sea. It is said that this rain and its unbounded love brought new growth to the frozen region. These spring rains were considered by all to be the official end of winter. Enamorus is also said to be temperamental when it came to the sanctity of life. If it witnesses a living thing being desecrated, it will bring down a wrathful storm onto the offenders as punishment.

Though Enamorus commonly is depicted as humanoid in its Incarnate Forme, its true self, which is its Therian Forme, can be seen if one views it through a Reveal Glass. While its brothers are common figures in Unovan mythology, Enamorus is almost entirely absent from Unovan records altogether. Why it appeared to prefer Hisui is unknown, though some say its compassion led it to take on the duty of rescuing the region's inhabitants from their difficult winters each year.

Enamorus can change into her Therian Forme through the power of the Reveal Glass.

Enamorus is based on Ugajin, a fertility god in Japan. Ugajin is usually represented through a figure with the head of a man or woman and the body of a snake. The positioning/wrapping of the tail also resembling a constricting snake. Its snake-like tail may also reference a feather boa, a fashion accessory usually worn around one's neck. It, alongside the other Forces of Nature, resembles a genie.

Its Therian Forme is based on the Black Tortoise from the Four Symbols of Chinese mythology (alongside the other Forces of Nature, which resemble the other three). It overall mainly resembles a softshell turtle or snake.

Its name comes from "enamor", "amorous" and Aeolus, the wind goddess in Greek mythology. 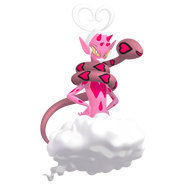 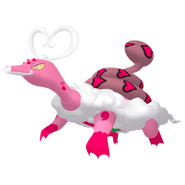 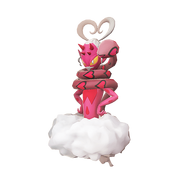 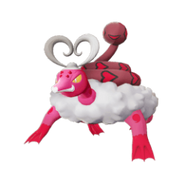