Emolga is a mammalian flying squirrel-like Pokémon that resembles Pichu, Pikachu, Plusle, Minun and Pachirisu. It has white fur on its face and the front side of its body. The back of Emolga's head is black. Its two large ears are yellow with white centers. Emolga's stubby forearms have three fingers on each hand. Its membrane is used to glide and store energy produced in its cheeks. This membrane is black on the back of its body and yellow on the front. Its legs are very short and it has small oval-shaped feet without toes, also similar to Plusle and Minun. Its tail is long and jagged; the base is yellow and the rest is black.

Emolga is able to glide through the air by using its cape-like membrane, which stores electrical energy. It also releases the electricity from its membrane in order to electrocute opponents, as well as repelling bird Pokémon away from its stash of food.

In the Alola region, Emolga has been known to inhabit tree holes excavated by Pikapek.

Emolga does not evolve.

Emolga is based on a flying squirrel.

Emolga's name may be a combination of the word "Electric" and "momonga" flying squirrel.

Emonga is a combination of Emon (Japanese for "cloth"), electricity, and momonga. 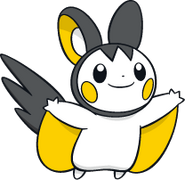 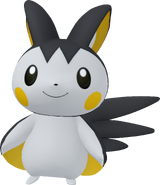 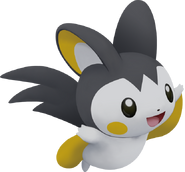 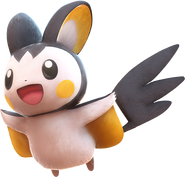 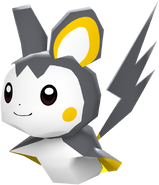 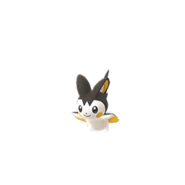