Elma is a character appearing in the XY series, who is a Pokémon Performer.

Elma was first seen competing in the Pokémon Showcase contest in Coumarine City. She lost in the first round with her Roserade and was unable to make it to the Freestyle Round.

She then obtained three Princess Keys offscreen and became eligible to compete in the Master Class in Gloire City. Elm participated in the third group of Performers with her Roserade but lost and was eliminated from the Master Class in the first round, much to her disappointment. 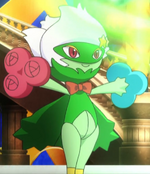