Elgyem is an aqua-green extraterrestrial Pokémon with an oblong head with depressions on either side. It has black, symmetrical lines going down the front of its head. On the front of its head are shiny, green button-like eyes. Its hands have three finger-like digits: one red, one green, and one yellow. It has short, stubby legs and a small tail.

These Pokémon appear to communicate by flashing the lights on their hands. They seem to be highly inquisitive about novel objects, examining and playing with them using their psychokinetic powers. Though not inherently aggressive, Elgyem will use their powerful psychic abilities to give foes crippling headaches when threatened. Those afflicted often wake up with no memory of what had occurred. It is said that when Elgyem pass by media devices, the electronics will begin to display an image of their true home—though it is unlikely that anyone who sees the image will remember it for very long.

Elgyem made its first anime appearance in "A UFO for Elgyem".

Elgyem is based on an extraterrestrial life-form, most likely Greys or Little Green Men. The level it evolves at, Level 42, may reference The Hitchhiker's Guide to the Galaxy, as the number 42 is stated to be the meaning of life, the universe, and everything. Its glowing fingers may also reference ET. Its fingers are also similar to the faces of the aliens that appear in the The War of the Worlds movie. Its Pokédex entries also suggest references to the Roswell incident and Area 51. Its Psychic-type could reference how some aliens in various media are able to use telekinesis to battle or abduct people. Its greenish color, big head, shortness, alien nature, and pupil-less, monochrome eyes (which in its shiny coloration are reddish-purple) may be a reference to the titular character of the Nickelodeon animated series Invader Zim, who's a short, big-headed, green-skinned alien with purplish-red, monochrome eyes, and the titular character Crypto from Destroy All Humans.

Its Sword Pokédex entry of it standing near a TV, causing a strange scenery will appear on the screen references how Aliens in media are commonly known for interfearing with technology such as Cellphones, Laptops, TVs, and Computers.

Rigurē likely comes from "little," (ri, logic, as it's a Psychic-type), "gray" (as in gray aliens), and "little green man." It may also incorporate "ray," as energy-based weapons and attacks are often associated with aliens.

Lewsor, its French name, comes from Roswell (a city in New Mexico where some believe aliens crash-landed in 1947 and has thus embraced a space theme for several of its local businesses in order to promote tourism) spelled backwards and with only one "L".

Pygraulon, its German name, likely comes from "pygmy" (referring to its short stature), "grau" (German for gray), and "encephalon" (a vertebrate's brain).

Xiǎo​huī​guài​, its Mandarin Chinese name, comes from (small), (gray), and (strange or possibly short for , which means monster or creature). 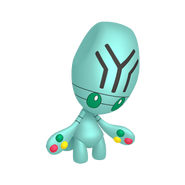 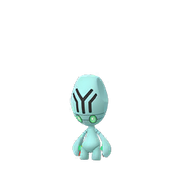