For the variant appearing in the games, see Elesa.

Elesa is a character appearing in the Pokémon the Series: Black & White, who is the Gym Leader of Nimbasa City in the Unova region.

This section, or a part of it, has been transcluded from Elesa; any changes involving it should be made there instead. /

Elesa is a Gym Leader, who is also a fashion model, with many fans. Elesa admires beauty and constantly attempts to impress her spectators, especially in battle.

The name Elesa derives from electric and possibly laser or tesla, a unit of magnetic induction.

The heroes met Elesa at a fashion show, where Elesa was the model, showing off new clothing designs. As Elesa was walking on the catwalk, she noticed Ash's Pikachu and was interested by it. Being told Bianca and Ash came for the Gym match with her for her Gym Badge, Elesa, after the show's conclusion, changed into her normal clothes and met the group in the Nimbasa City Gym. To Bianca's surprise, Elesa announced Bianca's father came, who wanted to exit the Gym with his daughter. Bianca accepted in the condition of losing in the Gym battle against Elesa. In the battlefield, Elesa sent her Zebstrika against Bianca's Shelmet. Shelmet started with Acid, but was rapidly defeated by Zebstrika's Double Kick and Flame Charge. Bianca sent Minccino, that damaged Zebstrika with Hyper Voice, but was also defeated by Zebstrika's Double Kick and Flame Charge. For her final Pokémon, Bianca sent Pignite, that valiantly fought against Zebstrika, doing great damage with Flame Charge and Heat Crash, but was defeated by Zebstrika's Wild Charge. The group, along with Elesa, went to the Pokémon Center to revitalize their Pokémon. Viewing Bianca saddened, Ash decided to engage her father in a Pokémon battle to enhance Bianca's confidence and reunite her with Ash, with Elesa as the judge. While Ash had lost against Bianca's father, Bianca's father observed Bianca actually learned much from the friends she acquired since she commenced her journey and permitted her to continue. Elesa, however, anticipated the following day, when Ash would challenge her.[1]

The following day, Ash challenged Elesa to a Gym battle. Ash sent his Palpitoad against her Zebstrika. Elesa was slightly displeased Ash's Palpitoad was not as fashionable as her Zebstrika. Her Zebstrika inflicted damage on his Palpitoad with Flame Charge, boosting its Speed. Palpitoad distracted Zebstrika with Supersonic and defeated it with Hydro Pump and Mud Shot attacks. Elesa intended to charm Ash by sending out her Emolga, that infatuated Palpitoad with Attract and defeated it with Aerial Ace. Ash escaped and returned with his Snivy, that valiantly fought against Emolga, that resisted Grass‐type attacks. Eventually, Snivy was defeated by Emolga's Aerial Ace. Ash became frustrated, and as he wondered which Pokémon he should choose next, his Pikachu, intolerant with Ash's behavior regarding his Gym battle with Elesa, shocked him and exclaimed at him since Pikachu wanted to battle, recovering Ash of his frustration. Pikachu and Emolga used Electro Ball; the attacks collided with each other, but Pikachu's Quick Attack defeated Emolga. Elesa praised Ash for such an incredible performance and sent her ace Pokémon, Tynamo. Tynamo used Tackle with tremendous speed, hitting Pikachu, that still wanted to battle, making Elesa pleased Ash and Pikachu were still disposed for the challenge. Pikachu released Thunderbolt on the field, creating many holes, and hit Tynamo with Iron Tail, defeating it. Elesa gave Ash the Bolt Badge as a sign of Ash's victory. She recommended going to Driftveil City, but warned him the bridge of departing Nimbasa City had not been repaired yet.[2]

Cilan remembered Elesa, since his task was to dress as her. Cilan tried his best to dress as Elesa, as well as his Pansage to look like Emolga, though it was not sufficient for Miles to give him a passing grade, since Miles was Elesa's fan.[3]

Elesa was mentioned by Dawn, who went to Nimbasa City. There, Dawn saw Elesa, who was shown in various outfits.[4]

Ash remembered battling the Unova Gym Leaders, including Elesa, at night before entering the Unova League.[5] 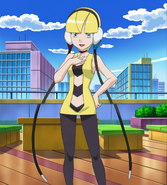 Elesa in a formal party dress. 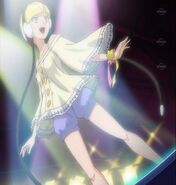 Elesa in a short scalloped dress, appropriate for peaceful immersions in nature.

Elesa in a casual outfit. 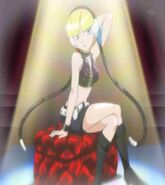 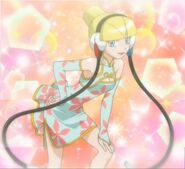 Elesa on a magazine cover.