For the variant appearing in the games, see Elesa.

Battle at the Museum

Elesa is a character appearing in Pokémon Adventures, who is the Gym Leader of Nimbasa City in the Unova region.

This section, or a part of it, has been transcluded from Elesa; any changes involving it should be made there instead. /

Elesa has short black hair, with long extensions tied in two diamond patterned braids. She wears a blue and yellow two piece, made up of a crop top and very short shorts, with a large, fluffy yellow coat, and ballet flats, one red and one blue. Her top and shorts are connected by a hexagon shaped buckle. Elesa also wears new headphones, with cone shaped spikes protruding out of the ear pieces, with the right spike red and the left spike blue. In addition, she wears nail polish, red on her right hand, and blue on her left.

Elesa is a demanding woman, having many requests to improve the quality of Nimbasa City, her home. Still, she has a humorous side to tease people a bit.

The name Elesa derives from "electric" and possibly "laser" or "tesla", a unit of magnetic induction.

When Elesa was a child, she went to visit her grandmother. On her way, she and her Blitzle encountered a Pokémon. Her grandmother stated she had encountered a Thundurus, who was a Legendary Pokémon of Unova, alongside Tornadus. While Elesa had been planning on becoming the Electric-type expert, she was also interested in capturing Thundrus.[1] Eventually, Elesa became a famous model of Nimbasa City, and the Gym Leader.[2]

Black researched that Elesa was a Gym Leader that he'd have to defeat on his way, to participate in the Pokémon League.[3] Virizion, Terrakion and Cobalion - the three Sacred Swords - traveled across the Unova region, and saw that the Gym Leaders had a strong bond with their Pokémon.[4]

Elesa attended the Xtransceiver conference call between White, the director, and the mayor.[5] Elesa didn't express an opinion about Pokémon Musicals, but she was exasperated by the council, who hemmed and hawed when it came to planning the Pokémon Musical and ended up dumping everything onto White's (glad) shoulders. She became impressed by White's capabilities and her sound plans and ideas.[6]

Elesa met Black at the Pokémon Musical building, who was wandering while White was arranging things for the musical. She was interested in White when she heard Black refer to her as "president" and told him how impressed she was with White. When she stood up, Black realized she was the Gym Leader, while Elesa added that she was an Electric-type specialist. She heard of his exploits with his Musha, turning him into a detective. She told Black that his Pokémon gym battle with her will have to wait until after the Musical. Black was still dizzy, and accepted that proposal.[6] Elesa made her presentation of her Emolga, dressed with props, to the audience at the theater. Elesa explained that was what Pokémon Musicals were about, and urged the audience to participate. Elesa left, and White applauded her for such a great performance. Elesa, however, stated it was White's script that made the performance great. She observed that White was a great director and producer. Without further ado, she stated it was time for her battle against Black, who remembered she was the Gym Leader. However, Black saw White was in distress, and needed help. Elesa nevertheless dragged Black away, stating that White needed to solve this problem on her own, as she was qualified enough as a producer to resolve such matters.[2]

When Black arrives at her gym, Elesa showed him how to operate the roller coaster system. She was waiting for him on the battlefield, and when he arrived, his safety was jammed, trapping him in the roller coaster car. Elesa was going to put off the battle, but Black insisted he could start his battle, despite the predicament. Elesa smiled, and accepted his challenge: a 2-on-2 battle. Black's Tula and Elesa's Zebstrika were sent out. Black started moving on the roller coaster, to which Elesa stated that was why she wanted to repair the roller coaster, but mused that it was fun to battle an opponent in such manner. Tula fired Electro Ball on Zebstrika, who defeated it, because its Motor Drive ability rendered electric-type to increase its speed. As Black sent his Nite, Elesa's Volt Switch strategy was very effective against it: Zebstrika and Emolga were swapped, and Nite was unable to hit either of them.

As Elesa went to send her Zebstrika out, Nite used Bulldoze to knock it out. Elesa noted that Black kept this move hidden and used it in the perfect moment. Since Nite was already exhausted, Elesa sent Emolga out, whose flying-type skills attacked Nite and kept it out of the reach. Elesa asked Black if he was going to use his Musha to help him come up with a strategy, just like it was done with the roller coaster prblem. Black explained that he was the "coach" of his team and he couldn't depend on his Pokémon to get them out of trouble, a philosophy Elesa viewed as noble. To gain an advantage, Black had Nite hang on the top of the roller coaster, and enacted an aerial attack to smash Emolga and defeat it. Elesa saw that Black has outsmarted her, and gave him the Bolt Badge. Suddenly, the roller coaster pulled Black away to the outside, and when he returned, he was soaked and fried with electricity. Elesa realized that he has seen Thundurus, as she had as a child.[1]

Elesa remained in her Gym, and examined her roller coaster system, seeing it had been tampered with. As she was analyzing the problem, a boy snuck past her. Elesa turned around to see who that was, but neither she nor her Emolga could see the culprit.[7] Elesa went near Driftveil Drawbridge, where she encountered Black. She took him to the bridge, and explained she was waiting for the caretaker, but nobody replied to her. Black wondered who the takecarer was, and was told it was a fearsome Gym Leader, Clay. However, she was a bit troubled, since Clay never neglected his duties. Elesa remarked Black would have to wait for a bit for Clay to arrive. She teased him a bit about White, then went away.[8] Lenora called other Gym Leaders, including Elesa, to meet her at Nacrene City museum: she displayed the Dark Stone so the enemy would take the bait, and the Gym Leaders would be ready to fight them.[9]

Elesa faced the Shadow Triad, and teamed up with Clay to confront one of the intruders. While Clay's Excadrill got hit by Lilligant's Mega Drain, Emolga used Acrobatics on the latter. Clay thanked Elesa, reminding they should not slack around. While battling, she noticed how amazing Brycen was, as his tactics allowed him to capture the Shadow Triad with an icy chain. The Gym Leaders confronted the Shadow Triad, and demanded of them to take them to Team Plasma's king. However, the Shadow Triad called upon the Weather trio: Tornadus, Thundurus and Landorus, who emitted a giant surge of energy, forming a whirlwind that engulfed the Gym Leaders. To save the Gym Leaders, Black went to attack, and his Nite evolved.[12] However, Black failed to hit Tornadus, Thundurus and Landorus, who blew him away. Without further ado, Skyla, Clay, Burgh, Elesa, Lenora and Hawes were taken away, while Brycen made a dummy ice sculpture of himself to escape their capture.[13] Brycen was searching far and wide to find any traces of Team Plasma, and wondered where the Gym Leaders, like Elesa, could have been taken to.[14]

When the Pokémon League began, Caitlin used her powers, and detected that the Gym Leaders were in a dark place. She conveyed their message: "HELP".[15] Caitlin went to Black, who was having a battle against Drayden. Caitlin interrupted the battle to have Gothitelle touch Black's head, linking his mind with the Gym Leaders, who were trapped in a strange dark place. Skyla, Burgh, Elesa, Clay, Lenora and Hawes appeared in Black's mind, who asked of him not to be gloomy, and not to give up. They apologized for putting a lot of strain on Black, and have heard that Black's Musha had abandoned him. Black didn't want their condolences, believing Musha would've abandoned him sooner or later. Elesa pointed out Black's belief that he was a coach and his Pokémon were his players; while they had different roles, they both strived to win the battle together. The Gym Leaders exclaimed that Black had defeated them all because he was listening to his Pokémon, and the answer was inside of him.[16]

Brycen, who heard the news about the missing Gym Leaders, suspected that their memories have been wiped out, for they could not remember where they were taken to.[17] As N's castle emerged from the ground, Ghetsis revealed that Elesa was crucified, along with the rest of the captured Gym Leaders.[18] The trainers, who fought to release the Gym Leaders, had Patrat chew off the ropes binding them. The Gym Leaders were released, and joined the fight against the Team Plasma Sages.[19] With the battle over, Skyla watched N departing away with Zekrom into the sunset.[20]

Elesa spotted Leo and Hugh's sister at the construction site. She and Leo demanded to know who the other was, but Elesa started to recognize that Leo was one of the participants of the Pokémon League two years ago. Elesa and Leo recognized each other; the former explained that a bunch of students have been rescued by Marlon from Castelia City, and were taken to the Marine Tube, from where Cheren asked of her to find the missing students. Leo became pleased, and Elesa asked of Skyla to descend down with her airplane. Elesa suspected they came from the Relic Passage, while Leo and Hugh's sister explained they went to the sewers, where they heard Hugh's voice, and in that moment, the entire city became frozen by Team Plasma. Elesa placed her jacket on Hugh's sister, and explained that Team Plasma was freezing Unova cities. Soon, Skyla descended down, and met up with the group, including Looker, who was trying to pick up Blake's Gliscor and Kabutops, who had fainted.[21]

Elesa went with Skyla in the airplane, along with Leo and Looker. Elesa had a brief phone call with Clay until Skyla stopped the plane, for just in front of the airplane Colress and Blake chased one another on their Genesect.[22] 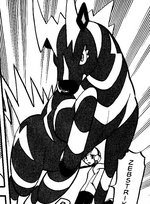