Elesa in other languages

Bolt Badge
Elesa is Gym Leader of Nimbasa City's gym of the Unova region. This gym will be the fourth to be challenged by the player character. She specializes in using Electric-type Pokémon. She will award the player the Bolt Badge if defeated. Her first appearance was in Pokémon Black and White.

Like the rest of the Unova gym leaders, Elesa has a career outside of being a gym leader, in which she is a supermodel.

Elesa has short black hair, with long extensions tied in two diamond patterned braids. She wears a blue and yellow two piece, made up of a crop top and very short shorts, with a large, fluffy yellow coat, and ballet flats, one red and one blue. Her top and shorts are connected by a hexagon shaped buckle. Elesa also wears new headphones, with cone shaped spikes protruding out of the ear pieces, with the right spike red and the left spike blue. In addition, she wears nail polish, red on her right hand, and blue on her left.

Elesa is initially portrayed to be a very calm and stoic character. However, she is self-conscious about people's perceptions of her, and believes that others probably do not think she is a fun-loving person due to her stunningly good looks. Much like the other Gym Leaders of her type, Elesa prefers to show off her skills with a sense of style and a performance to accompany it.

Additionally, Elesa has a fondness for bad puns. This is capitalized on in Pokémon Masters, where she makes a variety of Pokémon based puns.

The name Elesa derives from "electric" and possibly "laser" or "tesla", a unit of magnetic induction.

After the player exits the Pokémon Musical for the first time, Bianca's father confronts her and tells her to go home with him. However, Elesa steps in and convinces Bianca's father to let Bianca continue her journey. This makes Bianca admire Elesa and makes her want to be a model just like her. She then tells the player she's waiting in the gym for him/her. After defeating her, she goes out to Route 5 and contacts Clay, telling him to bring the Drawbridge down. When it does come down, she wishes the player good luck and returns to the gym.

She next appears along with the rest of the Unova Gym Leaders, with the exception of Cilan, Chili, and Cress, and battles the Seven Sages, allowing the player to continue.

For the rest of the game, she can be found in her gym.

She has changed looks, dying her hair black and wearing more revealing outfit. Her Gym is themed after a catwalk. Through the Memory Link it is revealed she's good friends with Skyla and wanted to practice making jokes, in a way to break the image of a serious person that everybody believes her to be, which upsets her. She throws bad puns which Skyla points out, but Elesa says that by doing so, people will poke fun at her and allow a new approach. Skyla thinks such way is old fashioned and should take it with ease. The two then agree to have a Pokémon Battle and Elesa asks Skyla to not call her "Shirley", hinting it to be her true name (and referencing the movie "Airplane!" in the process). 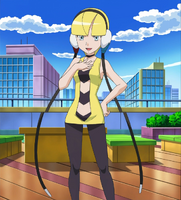 Elesa in the Black 2 and White 2 trailer (anime)

Elesa in the Masters trailer (anime)