Trace
Elaine is the female playable character in Pokémon: Let's Go, Pikachu! and Let's Go, Eevee!. Chase is her male counterpart, but they don't appear in the same game. She is analogous to Green.

Elaine is a skinny and short young girl with fair skin, brown hair tied into a ponytail, and brown eyes. She wears a red and white baseball cap with a Poké ball logo on it, a black and white t-shirt, blue-green shorts with a red waistband and bow, and orange and white sneakers with yellow shoelaces. She also carries around a light brown backpack. An Eevee is perched on Elaine's head in her artwork.

Just like every other playable protagonist in the core games, Elaine is silent and has no pre-existing personality. Except for some pre-made dialogue choices, she is completely mute. Unlike the previous few games (Omega Ruby, Alpha Sapphire, X and Y, etc.), she does not appear if the player does not choose to play as her.

At the start of the games, Elaine wakes up in the middle of her room in Pallet Town, apparently after just having a vision. When she tries to go downstairs, her friend Trace suddenly barges into her room and questions her about the weird look on her face. To cheer her up, he talks about how Professor Oak, the authority on Pokémon in the Kanto region, apparently wants to give the both of them a Pokémon of their own. After briefly talking about Elaine's computer, he then runs off towards the lab.

When Elaine leaves her house and reaches the outskirts of Pallet Town, she is shocked to see Professor Oak being surrounded by Pidgey. As the Pidgey fly off, Professor Oak greets Elaine. He talks about how he promised to give her a Pokémon that day, but he gets confused when he apparently forgets where he put it. However, opportunity knocks when a strange Eevee or Pikachu shows up at that very moment. Even though she has no Pokémon of her own and is unable to battle it, Elaine is able to capture the Pokémon with Oak's help. After being complimented on her fine performance for a first-timer, Elaine takes Oak's suggestion to nickname her Pokémon and tries to pick up its Poké Ball. Much to Oak's surprise, the Pokémon (still inside its Poké Ball at that very moment) bounces around Elaine for a few moments before it suddenly zooms off towards Oak's lab.

Chasing after the Pokémon, Elaine and Professor Oak meet up with Trace when they enter the lab. Surprised, Trace talks about how there was only two Pokémon in the lab moments ago before Oak reveals that Elaine is the owner of the wild Poké Ball that came zooming in. When an incredulous Trace says that he has never seen it happen before, the Pokémon briefly bounces in its Poké Ball. Oak then tells Elaine to take the Poké Ball, and when she does, the Pokémon bursts out on its own and happily greets her. Trace then takes a Pokémon himself, and before Elaine leaves the lab, Professor Oak gives her a Pokédex, telling her about his dream to make a complete guide on every Pokémon in the world.

After being challenged to a battle by Trace and subsequently leaving the lab, Elaine journeys across the entire Kanto region on a long quest. She destroys the evil Team Rocket, defeats all of the region's Gym Leaders, and eventually becomes the Champion by defeating Trace himself. Along the way, she also defeats Red, Blue, and Green, conquers every Master Trainer, and completes Oak's life-long dream by collecting every single Pokémon in the region. 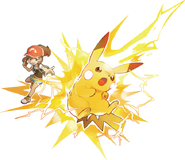 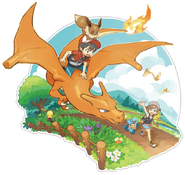