Ekans (Japanese: アーボ Aabo) is a Poison-type Pokémon introduced in Generation I.

Ekans is a snake-like Pokémon with purple and yellow coloring. Its underside leading to its tail is yellow, and it has a yellow rattle at the tip of its tail. Ekans have large, yellow eyes with slit, reptilian pupils. Across its neck is a large, yellow band.

Ekans, like real snakes, have the ability to unhinge their jaws. Ekans also share other characteristics with snakes, such as using its tongue to test the air for the presence of prey and shedding its skin. An Ekans will lose its rattle once it evolves into Arbok.

Ekans often live in tall grassy areas where they slither with great stealth. Ekans is also known to prey on Pokémon such as Pidgey, Spearow, and their eggs. Though often associated as a land Pokémon, they are capable of swimming long distances. When threatened in the wild, it will rattle its tail, flick its tongue to get its surroundings, and might use the move Glare to scare the opponent and have a possible getaway.

Ekans evolves into Arbok at level 22.

Ekans first appearance in the anime was in the episode Pokémon Emergency!, where it was revealed to be Jessie's Pokémon.

Ekans was widely known for being under the ownership of Jessie, a member of Team Rocket, who had received it on her birthday. It later evolved into an Arbok in the episode Dig Those Diglett!.

A group of wild Ekans, along with a group of wild Koffing, were captured by a poacher named Rico in A Poached Ego. Jessie's Arbok and James's Weezing saved them and then left with them in the wild.

An Ekans also appeared in "Team Go-Getters out of the Gate!" as a member of Team Meanies.

Ekans appears to be based on a rattlesnake.

Ekans' French name is an anagram of boa. 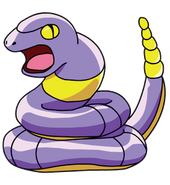 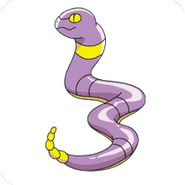 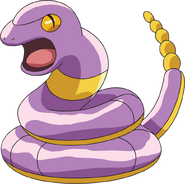 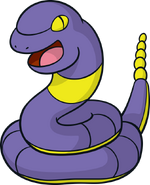 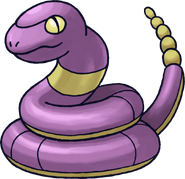 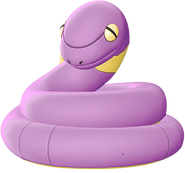 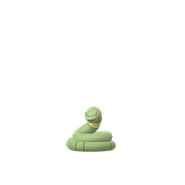